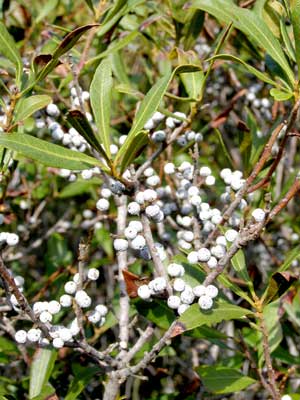 Two plants I mentioned last week when leading into the coral honeysuckle story are wax myrtle and yaupon holly. Both are major components in stabilizing our coastal sand dunes. Though very tolerant of wind and sea spray, when they are positioned near the dunes at the leading edge of the wind and wave action they hunker down in prone positions close to the ground. Further back from these harsh conditions, they occur as large shrubs or small trees. Both are beautiful evergreen plants with engaging fruit and are often used in residential and urban landscapes. In addition, they have a rich heritage of use by Native Americans.

Youâ€™ll find dried specimens of both of these important plants in Raleigh this Saturday at the N.C. Museum of Historyâ€™s 15th American Indian Heritage Celebration. From 11 a.m. to 4 p.m., the stateâ€™s eight recognized tribes will be celebrating their rich heritage through colorful ceremonial dancing and singing, storytelling, fluting and demonstrations, including the â€œburning into shapeâ€ of a dugout canoe and hands-on activities with Native-American crafts. A full schedule of events/activities is available at ncmuseumofhistory.org

Mary Locklear, Lumbee wildcrafter and herbalist, will be there to show and describe plant uses. I enjoy learning of the early uses of our native plants and the great stories associated with them.

The wax myrtle, Myrica cerifera, is often called southern bayberry, associated with popular bayberry candles. The waxy-coated, silver-gray berry-like fruits are the source for the scent of those candles. The Houma Indians of the Louisiana territories are described as boiling the wax from the berries of our southern species for candle making. These days, I suspect the northern bayberry, Myrica pensylvanica, with larger fruit, restricted in our state to Dare and Currituck counties, is most likely the plant used.

Numerous descriptions include decoctions of leaves, stems and roots for all manner of medicinal use, from headaches to stomachaches. I particularly enjoy reflecting on a wax myrtle use attributed to the Seminoles. They are reported to have used the plant as a tobacco substitute. With strong-scented glands on both sides of the leaves, that must have provided a mighty memorable smoke, indeed!

Ms. Lucy Mae Hammonds Locklear, a Lumbee elder, boiled the leaves from this tree, which she called the Merker tree, into a tea to treat whooping cough.

The beautiful red-berried yaupon holly, Ilex vomitoria, is the source of the â€œblack drink.â€ Fresh and dried leaves of this native holly do make a drinkable green tea, but the strong drink decocted by Native Americans throughout the Southeast was definitely an effective emetic and thus became a legendary seasonal ceremonial drink.

Osceola, a great chief of the Seminoles, was named after this ceremonial drink. His name meant â€œblack drink singer.â€ Closer to our region, the Cherokees are reported to have traveled from the west to trade flint and other objects with the eastern Lumbees for the â€œblack drink.â€

Enjoy this and more at the celebration this Saturday.