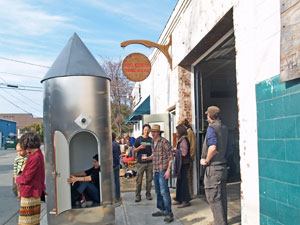 By Will Bryant
Staff Writer

Artists have always aimed to expand peopleâ€™s creative horizons and challenge a cultureâ€™s standards and perspectives.

Local artists Josh Lev and Leo Gaev have done just that and more with their latest piece of interactive art, titled â€œnew Whirld.â€ At the pieceâ€™s official display at Leo Gaev Metalworks in Carrboro on Sunday, the two showed how theyâ€™ve put a spin on art, flipping it completely upside down.

â€œItâ€™s an observatory to everyday life,â€ Lev said. â€œIt modifies the world just enough to get your attention and it allows you to see the world in a new way.â€

Constructed by Gaev, new Whirld looks and feels like a spaceship but actually features an ancient technology under a new-age disguise. Built with an aluminum frame and a stainless-steel exterior, Gaev said new Whirld was a one-of-a-kind project.

â€œWe basically had to figure out how to make it,â€ said Gaev, who has been working in the Carrboro-Chapel Hill area for nearly four years. â€œThere were no plans. We had to problem-solve every step of the way.â€

Discovered around 400 B.C., the camera obscura technology is photographyâ€™s distant relative and found use by ancient Greek and Chinese cultures and later by Renaissance painters.

New Whirld consists of a dark room thatâ€™s entered by a shiny copper hatch. Set in the hatch is a lens that allows light from the outside to pass through and strike the interior wall. The result is that the outside image is reproduced inside the room, upside-down and flipped, but with color and perspective intact.

New Whirld also has a steering wheel inside, which allows users to turn themselves 360 degrees inside the machine.

â€œItâ€™s almost like magic,â€ Lev said. â€œYou get a panoramic movie wrapped all around you.â€

Lev said his purpose for the piece was to challenge peopleâ€™s sensory perception.

â€œItâ€™s kind of cool that light coming through this little hole can make such clear images,â€ said Sara Nelson after taking a spin at new Whirldâ€™s exhibition. â€œItâ€™s something that I think is accessible to a lot of people and itâ€™s something that can be interpreted in a lot of different ways.â€

This isnâ€™t the first time one of Levâ€™s pieces of art has been on display in the Carrboro area. Some might remember his original camera obscura that stood at 400 W. Main St. in Carrboro, directly across from the fire station. The piece, which served as Levâ€™s senior thesis for Amherst College in Massachusetts, was a Carrboro landmark that stood for nearly 15 years.

â€œA lot of people knew me from that piece,â€ Lev said. â€œMayor Nelson asked at the time if it was an outhouse,â€ he said with a smile.

Lev says he would love to find a home for new Whirld somewhere in Carrboro, but says he would prefer that it find its way into a museum, where it could continue to inspire people.

Lev hopes that if people notice how beautiful the world is through his lens, maybe the world could become a more beautiful place.

â€œThatâ€™s something art can do,â€ he said.