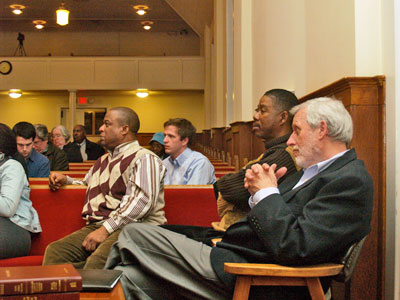 Those assembled had come out in support of fired Chapel Hill Public Works Department employees Kerry Bigelow and Clyde Clark, whom McSurely represents.

McSurely had learned the previous week that a Personnel Appeals Committee, comprised of Chapel Hill residents selected by the town council, had recommended against rehiring Bigelow and Clark after hearing the menâ€™s appeals. The committeeâ€™s nonbinding recommendations were sent to Town Manger Roger Stancil. On Monday, four days after the rally, Stancil upheld those recommendations.

The two men were fired in October for alleged insubordination and intimidating behavior toward supervisors and residents along their waste-collection route.

Bigelow and Clark countered that they were dismissed in retaliation for grievances they filed with management that alleged unsafe working conditions and racial bias in job placements and promotions.

They also alleged that the town took action against them in response to their efforts to organize town employees with the N.C. Public Service Workers Union-UE Local 150.

In his statement upholding the recommendations, Stancil wrote:

â€œThe Town of Chapel Hill does not tolerate discrimination, harassment and other forms of mistreatment within its workforce or in its relationships with residents and visitors. â€¦

â€œThe Town of Chapel Hill does not interfere with the right of our employees to organize. We recognize that right and support it with such efforts as dues deduction from paychecks for those who choose that option and provision of space for employee organization news postings in Town facilities. We have an on-going expectation and practice of involving employees in decisions that affect them.â€

Though Stancil had not yet released his decision, it seemed a foregone conclusion to those who gathered at First Baptist Church. Bigelow and Clark, now called the Sanitation Two, and their support team have stressed that, while disappointed, theyâ€™re undeterred.

The strategy now is to appeal to the public at large and to decide whether to file a suit against the town. The men also have filed a complaint with the Equal Employment Opportunity Commission.

â€œWeâ€™ve just begun,â€ McSurely told the crowd, composed of young and old, black and white, labor representatives from outside the area and longtime local social-justice activists. â€œWeâ€™re in this for the long haul.â€

McSurely has spoken of a â€œdeeper themeâ€ to the menâ€™s firings, rooted in what he describes as an ongoing history of discrimination against blacks by both the town and the university.

The rally began with a singing of the protest song â€œWe Shall Not Be Moved.â€ McSurely then described the appeals-committee hearings. He said he believed it was an â€œembarrassment to all those associated with the town of Chapel Hill to call them hearings,â€ citing town legal adviser Tiffany Sneedâ€™s use of anonymous witnesses to make statements against the men.

â€œThose of us whoÂ occasionally haveÂ glimpsed the townâ€™sÂ plantation practices toward its black workers were not surprised when it presented two anonymous female voices at the hearings as its main evidence against two black workers,â€ McSurely said this week.Â Â

â€œAnd we were not surprised when the town attorney,Â who announced he was advising the volunteer citizens on the hearing board, found nothing wrong with thisÂ violation of the concept of due process and fair hearings that has been recognized since the Magna Carta.â€

â€œI ask everybody here to stick with us as we dig in for a fight,â€ McSurely said Thursday night.

Curtis Gatewood, second vice president of the North Carolina NAACP, brought the assembled to their feet with a call to speak out on behalf of the men, saying, â€œIt ainâ€™t over till God says itâ€™s over.â€

â€œItâ€™s a lot bigger than Clyde and Kerry,â€ said Michelle Laws, president of the local chapter of the NAACP, â€œweâ€™re fighting for social justice for all public workers.â€

Laws said the men and their supporters are deliberating over next steps and that a legal defense team has been established. A collection was taken at the close of the evening, and Laws asked that people write letters to editors and express their views to town council members. She said that sheâ€™ll make an appeal for Stancilâ€™s firing at the March 14 council meeting.

â€œWhile there is no collective bargaining,â€ said activist and local NAACP officer Robert Campbell, â€œlet us speak with a collective voice.â€