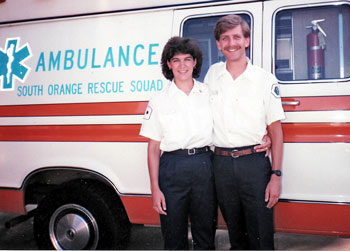 By Margot C. Lester
Staff Writer
My mother would never call the South Orange Rescue Squad, even when she had chest pains (twice) or a collapsed lung.
â€œThatâ€™s for people who are really sick,â€ sheâ€™d say later from her bed in the emergency room.
Despite my motherâ€™s belief, if youâ€™re having chest pains, trouble breathing or are in any other form of medical distress, I know for a fact the members of the South Orange Rescue Squad (SORS) will gladly come tend to you.


But there wasnâ€™t always a reliable source of emergency medical assistance in southern Orange County. Prior to 1968, â€œthere were basically no trained personnel to respond to medical or traumatic emergencies,â€ recalls Jeanette Jones, one of the original volunteers and a founding member of SORS.
Back then, if you lived out in the county, you were on your own or had to wait on the sheriff or volunteer fire fighters if you were beset by something. Even folks living in town had to find their own way to the hospital, or rely on one of the local funeral parlors to carry them there. Pretty ironic, huh?
Early days
The first volunteer rescue service was established for the county in 1968. Three years later, the southern part of the county got its own service: SORS.
â€œAfter a particularly bad automobile accident involving a fatality and several seriously injured people, members of the volunteer Carrboro Fire Department along with several Carrboro businessmen â€“ Lloyd Senter of Senterâ€™s Drug Store and Grady Sturdivant and Clyde Jones of the Friendly Barber Shop, to name a few â€“ met and decided that something had to be done,â€ Jones explains. Â
SORSâ€™ first ambulance was a gift from Orange County Rescue Squad â€“ a hearse named â€œMaude.â€ Hospital and state fire insurance personnel provided training for the inaugural class of volunteers.
â€œJoining us in the first EMS class was Bynum Weaver and some of his employees who also became EMTs,â€ Jones recalls. The first day of duty was June 6, 1971. â€œWe became paramedics, the second county in the state to have them.â€
The two volunteer services worked closely with Orange County Emergency Management to provide emergency and medical transport services for residents. They also provided vehicle â€œextractionâ€ (think Jaws of Life) and high-angle rope rescue, confined-space and swift-water rescue services.
â€œOver the past 40 years we have played many different roles in the countyâ€™s EMS system â€“ from being the only EMTs and paramedics in the southern part of the county providing ambulance transport to the hospital, to staffing all of the ambulances with EMTs, to providing extra ambulances to supplement the paid county employees,â€ explains Caroline Williams, a member of SORS. â€œWe continue to provide dedicated, standby EMS coverage for a wide range of special events including UNC football, basketball and baseball; high school football; and various street fairs, road races and celebrations throughout Orange County.â€
Volunteer army
Today, the squad has 96 volunteers on its roster, including instructors in CPR, EMS and technical rescue.
â€œWe are unique in that we will take brand-new EMTs straight out of their EMT class and give them volunteer experience on an ambulance so that they can later get a paid job doing EMS or get experience needed to go to, or for, medical or nursing school,â€ Williams says. Â
Over the years, more than 1,000 volunteers have worked with the squad. One is Chapel Hill native Dan Goulson, who worked on the squad during his medical training at UNC from 1985 to 1989, making him a lifetime member.
â€œThe first two years of medical school were all theoretical and not practical, but when I would take a 12-hour shift every 10 days, I got the chance to see what I was learning come into a real form,â€ says Goulson, who now works with Bon Secours Kentucky Health System in Lexington, Ky. â€œWorking with SORS was one of the great lessons in teamwork for me, too. We all shared in responsibilities and often rotated roles. There is no way to do this alone.â€
For Goulson, the squad provided more than a training ground, however.
â€œI met my future wife â€“ Nancy Storck â€“ volunteering there. We call it a rescue romance,â€ he says, laughing, before turning more serious. â€œThe squad has also helped my family out. They have gone to my grandmotherâ€™s in Northern Chatham County, and they picked up my mom from home on the day she died. Iâ€™ve been away from home Orange County for 22 years, but itâ€™s always been a comfort to know that South Orange is around in case anybody really got into a jam.â€
Anniversary party
The squad will start celebrating its 40thÂ anniversary this Saturday with an open house at the station on at 202 Roberson St. in Carrboro from 2-4 p.m. The event will feature CPR and rappelling demonstrations, station tours and a remote-control â€œtalkingâ€ ambulance. Refreshments will be provided by Maple View Farms and Sugarland Bakery. The family-friendly festivities are free and open to the public.