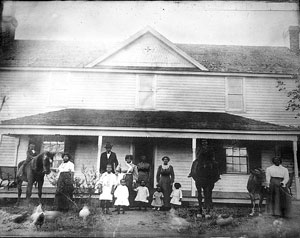 The Preservation Society of Chapel Hill has entered into the next stage of its efforts to restore the historic Strayhorn House, located at 109 Jones Ferry Road.

â€œThis is one of the best tools we have to try and save the Strayhorn House for future generations,â€ said Preservation Society director Ernest Dollar.Â

The two-story home, originally a one-bedroom log cabin, is on the study list of the National Register of Historic Places, but is in need of major repairs. The Preservation Society began raising money for the repairs last year, and the fundraising efforts have yielded about $4,400, Dollar said. The society has now launched an effort to raise an additional $10,000 for further restorations.

Of pressing importance is a solution to recently discovered termites.

â€œThe structural footings in parts of the house are in desperate need of repair,â€ Dollar said. â€œWe are hoping that if we can raise enough money to repair the floor, that we can treat the termite infestation simultaneously.â€

â€˜We fought to free youâ€™
The home is one with a rich history.

In a 1950 interview, Nellie Strayhorn recalled the day she learned of her freedom:

â€œWhen the Yankees come the first time, all the hands was in the field, just like master was there. They asked Mother if she knew we was free. She said â€˜No sir,â€™ and I was standinâ€™ beside her when she said it. â€˜We fought to free you,â€™ they told her. They was nice but we was afraid, â€™cause we werenâ€™t used to those blue suits and shiny buttons, and the guns at their sides.â€

Nellie took a job in a law office for $5 a month. Toney taught himself to read and write and learned brick masonry, and would later help found the First Baptist Church of Chapel Hill.
The two met, married, together built their Carrboro home, and raised a family there. Their bedroom and living room remain as they were in the 1800s.

Dollar said that Strayhorn family members came to the area last year for a family reunion and had hoped to visit the Strayhorn House.

â€œRenovations by the Town of Carrboro prohibited their visiting,â€ Dollar said, â€œso, hopefully, when the reunion returns next year they can experience an important piece of their familiesâ€™ history.â€

More can be learned about the house and the Strayhorn family, and donations can be made, at the Preservation Society of Chapel Hillâ€™s website at chapelhillpreservation.com