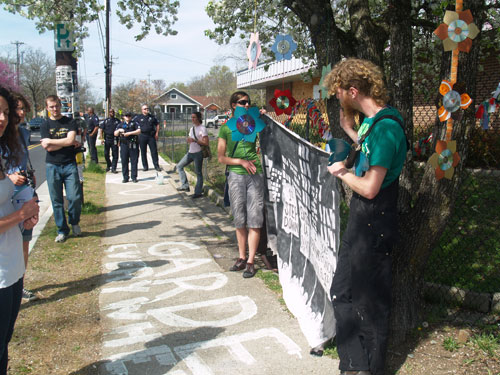 When Carrboro was first introduced to a group calling themselves the Carrboro Commune in February, they were occupying the vacant building at 201 N. Greensboro St. to protest a two-story CVS development proposed for that location.

For their second public protest, the Carrboro Commune returned to the same site on Saturday, but this time, instead of trying to take back the building, they took back the earth. Though the event seemed to pass relatively peacefully, several days later protesters, police and members of the Carrboro Board of Aldermen are reflecting on the demonstration â€“ some with praise and some with criticism, for both protesters and police officers.

Trading bandanas that obscured their faces for face paint and spray paint for sidewalk chalk to spread their message, participants on Saturday grabbed shovels and rakes and expressed their opposition through gardening.

In an event they called Guerrilla Gardening, a group of about 40 commune members, collaborating with members from Carrboro Greenspace and Croatan Earth First!, planted herbs and medicinal plants in front of a chain-link fence that now surrounds the building.

â€œWe are just a loose affiliation of citizens that are interested in creating ways to live outside of capitalism,â€ commune member Vincent Gonzalez said.

â€œThis is really about getting the community together to support one another and to do activities against the CVS,â€ he added.

While the chain-link fence â€“ erected after the previous occupation to prevent trespassing â€“ limited where their shovels could dig, it didnâ€™t keep protestors from tossing seed bombs over it to disperse their message.

Demonstrators hoped their seed bombs â€“ essentially, balls of clay filled with either dirt or compost and seeds; in this case, wildflower seeds â€“ would break open once tossed over the fence, scattering the seeds on the property.

In addition to gardening, participants decorated the fence with long colorful woven garlands; hung decorations from the trees; made birdfeeders out of seeds, peanut butter and pinecones; and posted a sign that read, â€œGarden everywhere.â€

The event not only stopped curious passersby, it also brought out numerous local elected officials checking out what was going on and a contingent of police officers keeping a close watch on the event.

â€œI wanted to witness this prominent Carrboro event,â€ board of aldermen member Dan Coleman said. â€œAs elected officials, it is important to be here and witness what is going on.â€

Coleman also said he had some concern over the number of police present at the event, a concern echoed by fellow aldermen member Sammy Slade, who also attended the event.

â€œIt is a concern of mine to see so many resources dedicated to safeguarding an empty building,â€ Slade said.

Despite a fairly peaceful event, Saturdayâ€™s festivities did result in one arrest. Gonzalez was arrested for impeding traffic as he blocked the road while chalking it as a car was trying to turn.

â€œGenerally, it seems people are not in favor of a CVS,â€ Slade said as he reflected on the perspectives he heard at the event.

â€œPeople seem to have an aversion to it on grounds of it being a big corporation with deep pockets, and if they are the only people who can afford to live in this town, then we have bigger problems.â€

At Tuesdayâ€™s Carrboro Board of Aldermen meeting, two of the demonstrators spoke to the board, also expressing concerns about the number of police present at the Saturday event, as well as photos and videos taken by the police of the protesters.

Elizabeth Reeves said that the demonstration was peaceful and positive, and that the only negative aspect of the event was â€œthe oppressive police presence, police surveillance and the targeted arrest of a participant.â€

David Malekin, a demonstrator who was arrested during the Nov. 13 demonstration at the former Yates Motor Co. building in Chapel Hill, agreed that the arrest was targeted.

â€œ[Police] chose to single out somebody because he was involved in an action doing the exact same thing that plenty of people were doing in a one-block radius of where we were,â€ he said, referring to pedestrians jay-walking across streets.

â€œThatâ€™s speaking to power when power is actively acting against us,â€ Malekin said. However, he ultimately agreed to meet with Gist and Carrboro Police Chief Carolyn Hutchison over coffee.

Several board members said that when demonstrators engage in civil disobedience, some level of police response should be expected.

â€œWe donâ€™t spend any time investigating people involved in organizations that are doing things that are legal,â€ Chilton said. â€œTo sit back and say, â€˜Well, Iâ€™m a part of these various things that are against the law and I feel that itâ€™s not fair that Iâ€™m being investigated for that,â€™ is sort of an unrealistic expectation.â€

â€œWe have no idea how many people are going to show up [to demonstrations], and weâ€™ve got to schedule people to be available to deal with a variety of situations,â€ he continued. â€œAs it turned out, those were pretty mild situations, but we had no way of knowing that.â€

Board member Randee Haven-Oâ€™Donnell stressed the importance of communication between the demonstrators and the police.

â€œCivil disobedience is about pushing the boundary, and at some point when you are disobedient and you know youâ€™re being disobedient and you intend to be disobedient, you also need to be willing to have the conversation afterwards,â€ she said. â€œYou want to engage around the fact that youâ€™ve made a stand for a reason, and thatâ€™s when you get to explain what your reason is.â€

However, both Coleman and Slade on Tuesday restated their concerns about police response to the demonstration.

â€œI am very troubled by some of what Iâ€™ve seen,â€ Coleman said, adding, â€œThere should not be prejudices held in the minds of our police based on the organizational affiliations.â€

Slade thanked Malekin and Reeves for coming to the meeting.

â€œWe are the place where people come to make sure that thereâ€™s accountability for these kind of things,â€ he said.

Other board members said they supported the actions of the police.

â€œI donâ€™t want our police department, who knows very well the values of our community â€¦ to have to second guess what they do â€¦ in a situation that might be much more serious,â€ board member Lydia Lavelle said.

â€œI think our police department goes above and beyond trying to avoid the kind of situations that would be ones that would make us uncomfortable,â€ she added.

Board members agreed that the demonstration and other recent protests have created a need for the board to have a larger discussion on civil disobedience and policy.

â€œI do think we want to be able to look at policy and be sure that policy conveys our values,â€ Haven-Oâ€™Donnell said.

Chief Hutchison said Wednesday that from her perspective, Saturdayâ€™s events went well, and that she would welcome a discussion with demonstrators.

â€œOur goal was not to arrest multiple people,â€ she said. â€œOur goal was to encourage a peaceful and law-abiding protest, and I think that we achieved that. Itâ€™s unfortunate that one person elected not to comply, but thatâ€™s not my problem â€“ thatâ€™s his.â€

Hutchison said Gonzalez was warned by police to stop blocking traffic before he was arrested and that he had â€œmultiple opportunitiesâ€ to comply.

â€œSo I guess it is disheartening to me that some people feel that Iâ€™m not doing my job consistent with those values.â€