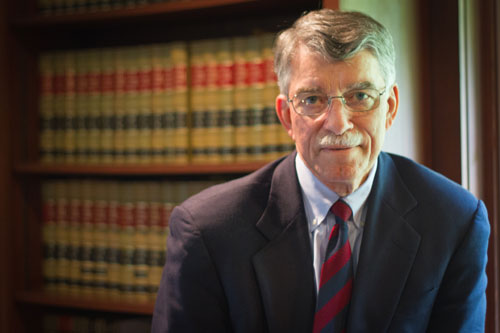 When Joe Hackney set out to represent this community in the North Carolina House of Representatives 32 years ago, he did so with purpose.

That purpose â€“ carried now through the decades â€“ has not only won him reelection over and again but respect as one of our stateâ€™s most effective leaders.

Hackney, who represents Orange, Chatham and Moore counties, will step down from his post at the end of this term, leaving some pretty big shoes to fill. This state has certainly felt the impact of the current House minority leader, who has remained committed to and fought for public education and the environment since day one.

In the late 1970s, after serving as an assistant district attorney and later starting a law practice â€“ Epting & Hackney â€“ Chatham County farm-raised Hackney decided to run for office following the decision of Rep. Ed Holmes not to run for reelection. He set out to do so wanting to focus on environmental protection, the civil-justice system and public education, and hoping to attain a position of leadership within the House, which heâ€™s accomplished, to say the least.

His initial bid for the District 54 seat was successful, and he began that first term in 1980. Years down the road, Hackney would attain a number of leadership roles, including that of speaker of the House from 2007-10.

In the beginning, while Hackney looked to mentors â€“ like Ike Andrews, Allen Adams and Liston Ramsey â€“ he also found his own way, learning the ropes and working through each new session.

â€œEvery single session is different,â€ he said. â€œThatâ€™s one of the things that makes it interesting and fun to serve.â€

A champion for education and the environment

On the Democratic side of the aisle, Hackney believes constants have been more prevalent than changes over the years â€“ constants like support for public education, public universities and community colleges.

He too has remained constant, at least in his support for education â€“ â€œPartly itâ€™s the job of the members from this area to protect the interests of the universityâ€ â€“ and the environment, something thatâ€™s been important to him from the beginning.

Hackney â€œwas particularly committed to education in all forms, of course always a great champion of the University of North Carolina at Chapel Hill and the entire university system, a strong supporter of education, K-12, Smart Start and community colleges,â€ former-Gov. Jim Hunt said.

â€œHe would just not let people slow down education in this state, and as long as he was speaker we continued to make great progress.â€

During his tenure, Hackney had a hand in legislation that helped drive the explosion of solar energy-related business in North Carolina, as well as the stateâ€™s vibrant recycling business.

â€œI canâ€™t think of any major environmental legislation thatâ€™s been enacted since1981 that Joe didnâ€™t play some role in getting passed,â€ said Bill Holman, former secretary of the state Department of Environmental and Natural Resources.

When Hackney was first elected, Holman was working as an environmental lobbyist, and â€œboy, was I glad to see him,â€ Holman said. â€œIn those days, kind of like in these days, there was a lot of hostility to environmental and public-health protection.â€

â€œIn the 1981 legislative session there were only about four legislators who would publicly identify themselves as environmentalists, and of course Rep. Hackney was one, and heâ€™s the only one thatâ€™s still around.â€

Hackneyâ€™s stayed committed to his work on family law as well, both in the General Assembly and at his law practice.

Through the years, Hackney has served as speaker, House minority leader, House Democratic leader, speaker pro tempore, president of the National Conference of State Legislatures and a number of other roles.

Evident from his election to so many positions, one of the things Hackney has drawn respect for â€“ from both Democrats and Republicans â€“ is his leadership approach.

â€œAnother member said to me once â€“ a Republican member who sat next to me while Joe Hackney was speaker â€“ â€˜He doesnâ€™t do anything for himself, does he?â€™ and I think thatâ€™s true,â€ said Rep. Deborah Ross of Wake County. â€œEverything he does is for the state of North Carolina, the good of the institutions.â€

Hackney is often noted for his commitment to policies and procedures, which he strongly believes in.

During his tenure as speaker, â€œwe almost never shut down debate, and we tried to go by the rules, and had fair rules,â€ Hackney said, adding that the House rarely scheduled midnight sessions at that time.

â€œWeâ€™re a society of rules and laws. When you know what the rules are you can succeed or fail on the rules,â€ said Laura Devivo, Hackneyâ€™s top policy advisor while he was speaker and House majority leader. â€œMaking laws is ugly. People get to weigh in, and they disagree and sometimes they disagree loudly, and for him that was just a part of an important process, a necessary process â€“ it wasnâ€™t painful. I think thatâ€™s a little bit different now.â€

Hackney attributes his success to communicating, with both his own caucus and Republicans.

â€œYou have to pay a lot of attention as speaker or as leader to the components of your caucus,â€ Hackney said. â€œUnless youâ€™ve got 61, you canâ€™t pass anything. â€¦ When youâ€™re in those leadership roles, the main thing is to have 61 votes.â€

When he was first elected speaker, Hackney spent much of his time communicating with those who had run against him for that position. Unity in the party, Hackney said, is key.

His tactics proved successful throughout the years, as he garnered those 61 votes he needed on countless measures.

â€œI think Joe Hackney has been one of the best legislative leaders in our stateâ€™s history,â€ Hunt said. â€œHe spent years learning the legislature and all the people in it, and he worked with all of them in a way that few speakers have done. Heâ€™s a person of strong views, personal views, and of course is a very progressive leader, but he also took into account the views of all of the Democratic caucus and the Republicans and was committed to letting democracy work.â€

Devivo pointed out how Democrats consistently supported him through both good times and bad.

Rep. Verla Insko said the state is losing one of its best legislators in history.

â€œHe knows everyone in the system, who does what and how the system works,â€ she said. â€œHis political style is flawless and his instincts are bulls-eye on-target.â€

So after 32 years, why step down now?

â€œI really thought it was a good time for us to transition the leadership of our caucus to someone else,â€ Hackney said.

â€œI intended to stay a good while and get to a position of leadership, and Iâ€™ve done that.â€ Plus, in November, â€œI think thereâ€™s a good chance weâ€™re going to take back control,â€ and he doesnâ€™t want to be speaker again.

â€œThings go in cycles in politics. In the 2010 election and the â€™11-â€™12 session, weâ€™re at one extreme of a cycle, and so I think it will swing back in the other direction.â€

Come December, he looks forward to spending time traveling (heâ€™s already extremely well traveled), working on his farm and working at his law practice, though heâ€™ll still keep his foot in the political door.

â€œIâ€™ll probably be around the edges of politics for a while,â€ he said.

Whatâ€™s next for House leadership, Hackney said, is â€œto reverse this disastrous decline in support for public education.â€

â€œAlmost every major Republican initiative [this session] in my view has moved the state backwards in some way,â€ he said, noting negative impacts to jobs, education and criminal-justice policy.

â€œI just think itâ€™s very important to restore a more moderate and less extreme leadership here in the House and Senate,â€ he said.

Hackneyâ€™s absence will be felt in the House, particularly in the Democratic caucus as it searches for its new leader.

â€œHeâ€™s so talented and heâ€™s been carrying so much water for so many causes that his constituents care about that other people havenâ€™t had the opportunity to develop in the same way,â€ Devivo said. â€œI think that this is a good and important opportunity for new leadership. â€¦ Itâ€™s time for somebody else to do some of the things he was doing.â€

â€œParticularly in the House, whoâ€™s the next environmental champion?â€ Holman asked. â€œWhoâ€™s the person who not only advocates or carries environmental legislation, but has the respect and clout with the other members?â€

The challenge for Democrats moving forward will be to stay together, Hackney said.

â€œWith a change in leadership, you never know,â€ he said.

For those just starting their careers in state politics, Hackney offers a few pieces of advice.

â€œGet to know all your colleagues. Request committees where you have expertise going in. I think itâ€™s important to not try to be a dominant force on the floor of the House at first.â€

In addition, â€œIf you want to have a career, pay a lot of attention to the folks back home.â€

Small things â€“ like solving a driverâ€™s license problem, getting a prisoner moved or helping local governments in small ways â€“ can go a long way, he said.

For this community, those small things have meant a lot.

â€œHe really is a hero,â€ Devivo said. â€œAnd itâ€™s not putting on a cape and flying through the city â€“ itâ€™s doing the hard stuff every day.â€

An event honoring Hackneyâ€™s years of service in the House of Representatives will be held May 10 from 5:30 to 7 p.m. at the home of James Crow, 109 Ledge Lane in Chapel Hill. Tickets are $100 each and are available at secure.actblue.com/page/joe32. For more information, contact Verla Insko at verla.insko@gmail.com or Maggie Barlow at maggiebarlow@gmail.com