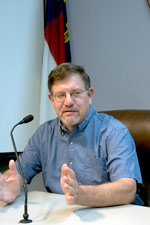 By Taylor Sisk
Staff Writer
Carrboro Board of Aldermen member Dan Coleman has announced that he will be resigning his position early next year and relocating with his family to Australia. Coleman told The Citizen on Tuesday that his wife, Paula Michaels, has accepted a position at the School of Philosophical, Historical and International Studies at Monash University in Melbourne.

Coleman said that while he will probably seek to establish his database-development business in Australia, â€œMy initial responsibilities will be to establish the household and support our son during the transition.â€

Meanwhile, in the eight or nine months in which heâ€™ll remain on the board, Coleman said he plans to continue to work closely with the new town manager, who, he said, â€œis off to a great start.â€

Coleman said he also has been strategizing with fellow board member Sammy Slade on new approaches to combating climate change and on â€œexpanding Carrboroâ€™s commitment to cooperatively organized affordable housing, a very popular if often below-the-radar aspect of our housing strategy.â€

Of his most significant accomplishments on the board thus far, Coleman cited pointing the town toward the Local Living Economy approach to economic development and in establishing Carrboroâ€™s affordable-housing trust fund and payment-in-lieu mechanism for affordable housing.

Board of aldermen member Lydia Lavelle said Coleman has always done his homework.

â€œDan is my go-to person on the board when I need to find out the nuances of an issue, and I can count on him to give me a well-considered perspective,â€ Lavelle said Tuesday night.Â

â€œWe will miss his forward thinking and his commitment to Carrboro.â€

As for politics in his future, Coleman said he would probably get involved in the Australian Green Party.

After Coleman’s departure, applicationsÂ will be acceptedÂ to fill Colemanâ€™s seat until the November 2013 election. A successor will then be elected to fill the remainder of his term, through December 2015. An announcement regarding applications will be made.