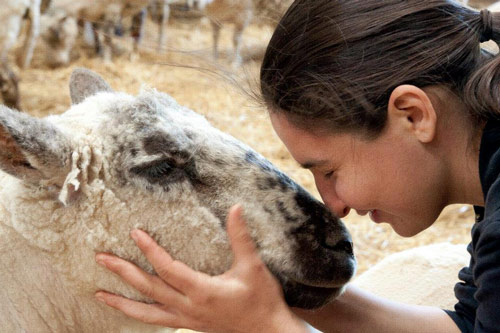 Located in Pittsboro off N.C. 87 are just under 16 acres soon to be dedicated to rescuing farm animals.

The place is called the Piedmont Farm Animal Refuge, and itâ€™s Lenore Brafordâ€™s way of fostering her love of animals, educating the public about the harms of factory farming and providing support for those who want to know more about where their food comes from and the vegan lifestyle. Braford hopes to open the refuge within the next month.

The Piedmont Farm Animal Refuge will be a sanctuary where rescued farm animals will come to live out the rest of their lives and the public can come for education.

While the organizationâ€™s name â€“ including the words â€œfarm animalâ€ â€“ might confuse people to think it includes horses, the animals there will primarily be those in factory farms that are eaten, like chickens. Due to space limitations, larger animals will be limited.

â€œWe probably wonâ€™t be rescuing horses,â€ she said. â€œWe have a limited ability to take larger animals because of space.â€

â€œWe are probably going to fill up very quickly because we do not have that much land,â€ Braford added.

At this point the refuge consists of nothing but space, as there are no animals yet on the 16-acre farm.

To fill the refuge, Braford hopes to receive animals from a variety of places such as the animal shelter and factory farms or stockyards.

Braford anticipates getting animals typically referred to as â€œdowned animalsâ€ from factory farms and stockyards. A downed animal is a farm animal that lives in a stockyard and has something physically wrong with it. Typically, these animals are seen by the industry as costing more then theyâ€™re worth and are killed, when often they just need simple medical care to get back to good health, Braford said.

â€œI have always had a love for animals, and once I kind of learned about factory farming and what farm animals go through, I knew I wanted to be involved in something like this,â€ Braford said.

To get involved with a farm-animal rescue organization, Braford realized she would have to start one herself.

â€œI started thinking about doing something like this four years ago,â€ Braford said. â€œThere really isnâ€™t anything around here like this.â€

Although she did not study agriculture â€“ instead graduating from Oberlin College with a degree in environmental studies â€“ Braford begin doing internships at animal sanctuaries and wildlife rehab centers to understand how they operate in preparation for opening her own refuge.

Through an internship at the Carolina Tiger Rescue, where she currently works, Braford learned about how nonprofits run.

â€œThere are a lot of people here who have supported me and are my mentors here,â€ Braford said of Carolina Tiger Rescue.

While Carolina Tiger Rescue was able to teach her about running a nonprofit, she knew she wanted â€“ and needed â€“ to learn more about running a sanctuary specific to farm animals, and to do that she went to upstate New York.

Farm Sanctuary New York is 175 acres where hundreds of animals, from cows to pigs to chickens, are cared for while thousands of visitors a year come to be educated about the animalsâ€™ lives and factory farming.

â€œI went there to learn as much as I could about caring for farm animals,â€ Braford said. â€œThe director, Susie Coston, is an amazing wealth of knowledge, so when I was there I was just trying to suck in as much information from her as I could.â€

â€œThere is so much to know, and I donâ€™t know everything yet.â€

In the future, once the refuge is filled with animals, Braford hopes to have an on-site kitchen to host food events and vegan cooking classes to help people understand the connections between their food and the source.

â€œWe want to make connections for people,â€ Braford said. â€œI see in our culture a lot of ignorance about food. â€¦ We donâ€™t know a bunch about what happens behind the scenes.â€

While prepping for the refuge to open, Braford and her all-volunteer board is hosting fundraisers and trying to get information out through their Facebook page, facebook.com/PiedmontFarmAnimalRefuge

â€œWe are all about rescuing animals, educating about what factory farms are like and all about vegan food.â€