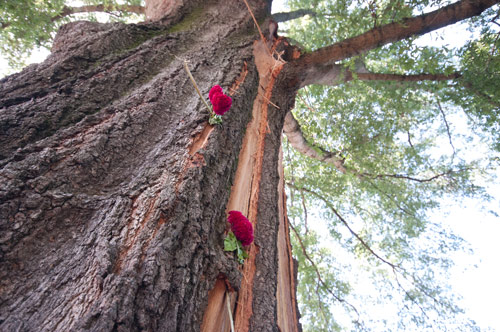 
A familiar piece of the Carrboro skyline was endangered last Thursday when lightning struck a large willow oak on the Weaver Street lawn.

The willow oak was likely planted in the 1930s, according to Ken Moore, Citizen Flora columnist and former assistant director of the N.C. Botanical Garden. The large tree, which sits at the eastern edge of the lawn, is a source of shade for lawn sitters and dancers, and itâ€™s not uncommon to see more than one person resting up against it.

Carr Mill Mall manager Nathan Milian said Bartlett Tree Service workers were on the scene the next day to treat the treeâ€™s wound with chemicals to prevent insects and disease from entering the tree.

â€œIt stripped bark off of one side in a couple of deep places,â€ Milian said of the strike. â€œBeyond that, we donâ€™t know what other damage there is.â€

He said Bartlett would continue to monitor the tree on a weekly basis.

â€œThereâ€™s really nothing we can do except wait and see now,â€ Milian said, adding that heâ€™s â€œcautiously optimisticâ€ about the treeâ€™s survival.

Chip Hildreth, an arborist with Arbor Carolina, said he thinks the tree has a good chance of surviving the strike.

â€œIt was a pretty good lightning strike, but itâ€™s not a killer lightning strike,â€ he said. â€œAs long as the tree doesnâ€™t succumb to something secondary, I think the chances are good.â€

With some lightning strikes, an entire side of the tree could be blown off and the top of the tree could buckle, Hildreth said, but that didnâ€™t happen in the case of the Weaver Street willow oak. At this point, monitoring the tree will help its chances of survival.

â€œWhat you donâ€™t want to happen is for an aggressive fungus to get into it,â€ he said.

On Monday morning, Weaver Street lawn regular Bruce Thomas placed flowers in the wound of the tree and asked others to direct their thoughts toward the willow oak.

Thomas was at Weaver Street Market when the strike occurred, which he watched from beneath the breezeway shelter. The strike looked like an explosion, he said.