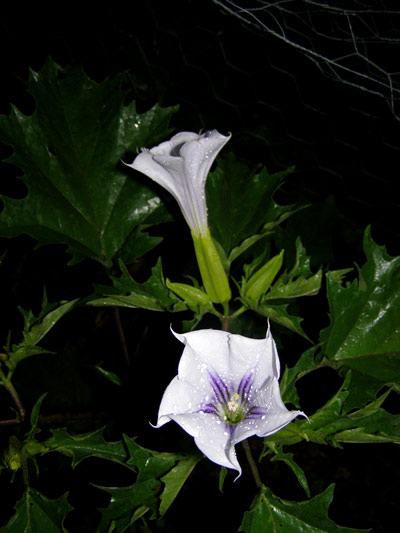 I had all but given up on the reappearance of my very favorite annual wildflower, jimsonweed, which usually appears in the yard and garden by early June. Only in the last couple of weeks has it shown up, and Iâ€™m so elated that Iâ€™m falling back to repeat what I wrote about it this time last summer.


Jimsonweeds will volunteer wherever there is open ground. They generally donâ€™t show up until early in the summer, and this year, in spite of the heat and the drought, Iâ€™m observing seedlings emerging late in the season. Iâ€™ve learned to recognize baby jimsonweeds because I want to have at least a few scattered about the garden. Nothing else looks quite like juvenile jimsonweedâ€™s distinctive narrow triangular leaves with scalloped margins.

Poisonous, night-flowering jimsonweed, Datura stramonium, is a native annual, never seen in cultivated gardens. Close-relative garden varieties of Datura, also called thorn apple, and Brugmansia, angel trumpets, are frequently seen in gardens these days. They are all beautiful, and we need to be aware they are all poisonous. Flowers of cultivated thorn apple are upright trumpet-shaped flowers 6 or more inches long. The even larger cream and peach-colored flowers of angel trumpets hang down beneath the leaves.


The native jimsonweed has a smaller flower, only 3 to 4 inches long, angled upward in the axils of sturdy branches on a 3- to 6-foot-tall plant. It seems more a small shrub than a tall annual. Each ghostly white, trumpet-shaped flower bears an intriguing purple center. It opens in the early evening to be pollinated by night-flying insects searching for pale-colored glow-in-the-dark, heavily scented flowers. The flowerâ€™s mysterious musty scent is alluring, and viewing them during evening explorations is a special experience.

Though poisonous, the plant has a rich medicinal heritage. Quoting Jim Duke (Handbook of Northeastern Indian Medicinal Plants): â€œIn Virginia, Algonquin fed male pubic initiates tea made from Datura, enough to keep them drugged for two to three weeks. Such initiates were supposed to forget everything and learn again, as men, not boys.â€ Apparently Capt. John Smithâ€™s followers at Jamestown tried this native custom, resulting in lengthy nonproductive stupors. It became known as loco weed and Jamestown weed. As often happens, names change as they are handed down through the years. â€œJamestown weedâ€ became â€œjimsonweed.â€


I am amused with Paul Greenâ€™s recollection (Paul Greenâ€™s Plant Book): â€œWe children used to have great fun in the dusk of warm summer evenings chasing after great tobacco moths that haunted the strong scented blooms of the jimson weed. I read in an old book once where it said that harem wives in Turkey were wont to chew this weed and swallow the juice to strengthen their powers of love. I wonder what the head of the harem, the old Turk himself, chewed.â€

Though it is a common plant throughout the state, most people miss the evening flowering and are intrigued when discovering it during winter walks when it is a curious-looking stem of bare branches with spiny egg-shaped pods. You may want to collect a few seeds and scatter them in a corner of your garden for some night flowers of your own.