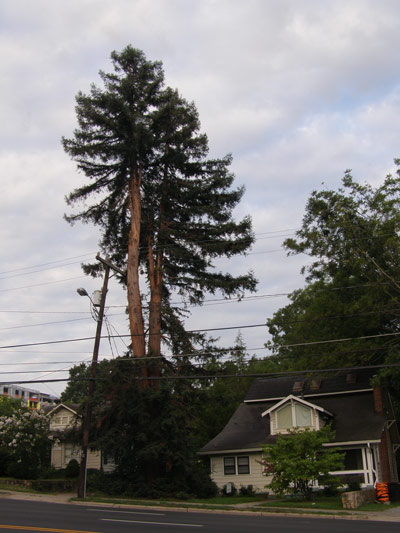 Several years ago I received a call from Bill Massengale, who was keen about the history of the California coastal redwood, Sequoia sempervirens, standing tall in front of his law office on North Columbia Street, just above the Chapel Hill fire station. Old-timers used to call that entrance to town â€œFire House Hillâ€ because the fire department was originally located in what is now the homeless shelter.


In search of an answer to Billâ€™s inquiry about who planted that tree and when, I queried botany professors, town officials and community old-timers; no one knew. That was several years ago.

This past spring I saw coastal redwoods growing in the wild where Americaâ€™s tallest growing tree survives in fog-laden ravines and canyons along the California coast. That memorable experience made me reflect again on Chapel Hillâ€™s redwood mystery.

I know for certain that Dr. Cliff Parks of the UNC botany department began rooting cuttings of the branch tips of that tree back in the late 1970s. One of Dr. Parksâ€™ successful cuttings is now a beautiful 30-year-old specimen growing in the Coker Arboretum. Another is at the corner of the Stephens Street parking entrance to Chapel Hill Town Hall.

Cliffâ€™s son David Parks of Camellia Forest Nursery has also rooted cuttings of that tree and, though success is minimal, over the years father and son have produced enough rooted cuttings that numerous young specimens are now growing in local gardens under Dr. Parksâ€™ cultivar name, Sequoia sempervirens, â€œChapel Hill.â€

How amazing it is that coastal redwoods from the foggy Pacific coast will survive in our Piedmont climate. David has other cultivars of the coastal redwood at Camellia Forest Nursery, and I plan to procure and plant one of my own later this fall.


But still, who planted that original Chapel Hill tree?

A few weeks ago I learned from Bob Durham of Academy Opticians that when he was a kid, he lived next door to that tree for several years, and he remembers it was a big tree several decades ago. Bob referred me to his childhood friend John Eliadis, whose dad owned and managed legendary Leoâ€™s on West Franklin Street. John, now living in Carrboro, also remembers that tree and recalls his dad describing how UNC chemistry professor Dr. Francis Preston Venable, president of the university from 1900-1914, brought seedlings of coastal redwood back from California in the early 1900s to establish in Chapel Hill and other locations on the East Coast.

For more clues in this tree mystery I turned to Bill Burk, local historian and retired botany librarian. He reminded me that in 1900 President Venable convinced newly appointed botany professor Dr. W.C. Coker to develop an arboretum in the 5-acre wet meadow next to the present Morehead Planetarium.

Bill directed me to a photograph in Essays on William Chambers Coker, Passionate Botanist, by Cokerâ€™s niece Mary Coker Joslin, of Coker standing beneath a redwood during a visit to California in 1909. So it seems logical that passionate botanist Coker was the one who brought redwoods back from California. But no one seems to know for certain.

I have a theory based on a couple of facts.

My theory: Close friends Coker and Venable planted those two trees around 1910 purposefully to frame the northern entrance to the town and university with two stately evergreen conifers, each representing the continentâ€™s west and east coasts.

Think about it, and for goodness sake, someone out there among you, let us know the real story about Chapel Hillâ€™s mystery tree.

Please take care not to confuse coastal redwood with the less common California giant sequoia, Sequoiadendron giganteum. Thatâ€™s another story in itself.