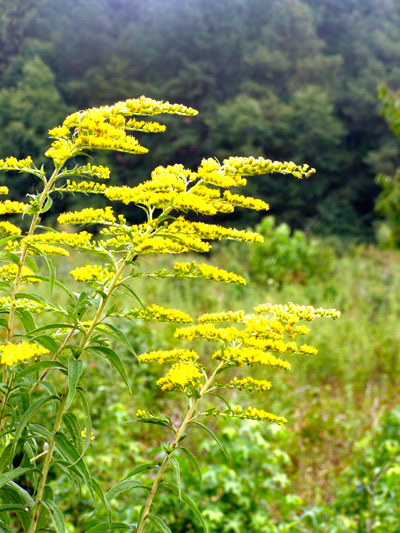 But before I go into that, thereâ€™s more about Chapel Hillâ€™s mystery tree.

Last week, space did not allow for me to tell how John Eliadisâ€™ dad also remembered there was a covenant issued that Chapel Hillâ€™s coastal redwood could never be cut. Obviously Duke Energyâ€™s utility pruning crew didnâ€™t know about that covenant when they performed their recent drastic pruning job on that tree.

But Chapel Hill town forester Curtis Brooks, once a Coker Arboretum curator who credits W.C. Coker with planting that tree, is not familiar with such a town covenant.

So emerges another mystery: What is, or was, that â€œno tree-cutting covenant?â€ Hopefully someone in Chapel Hill government or a town historian will uncover the answer.

Now back to hay-fever season. In spite of garden columns and articles in horticulture magazines during past decades, many of us still blame the fall seasonâ€™s miseries on strikingly visible goldenrods.


For goldenrod pollen to get up your nose, a bee or butterfly or other pollinating insect will have to carry it there, so you may relax when you see or walk by goldenrods. Goldenrods were one of the first American plants carried back in the mid-1600s to English gardens, where they are still a perennial favorite in flower borders.


Ragweed, as the photo shows, often grows right next to goldenrod. Ragweed leaf margins are distinctly deeply lobed like marigold leaves and in contrast, goldenrod leaves have smooth (entire) or finely toothed margins.

Ragweed flowers, without showy petals, are difficult to discern. They appear as a little candelabra of erect stems of countless pollen-bearing anther sacs held high above non-petaled female flowers in leaf axils on stems below. When fully mature the erect male candelabras are yellow with exposed pollen, waiting for the slightest breeze. These flowers are virtually unseen next to showy golden-yellow flower heads of goldenrods.


When we sneeze and see goldenrods in flower, itâ€™s easy to cast blame on the innocent, but thatâ€™s circumstantial evidence at best.

Learn the difference, avoid the ragweeds and take a closer look at the goldenrods, where youâ€™re likely to find interesting pollinators and tiny spiders hidden amongst the flowers awaiting their unsuspecting dinner visitors.