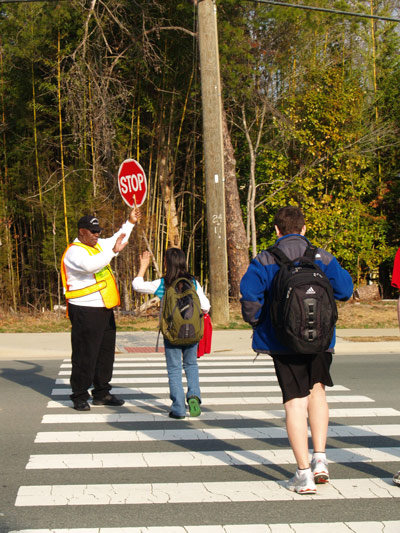 
CARRBORO â€“ As the school year starts on Monday, members of the McDougle School community will head back to class, but a familiar face wonâ€™t be there to greet them on their way to school.

James Paul Burnette, beloved longtime crossing guard at McDougle, died last week at UNC Hospitals. He would have been 75 this past Monday.

After retiring from his career as an operating-room technician at UNC Hospitals, Burnette became a crossing guard in 1994. He quickly became known for his on-duty high fives and fist bumps, his greeting to every parent and child who crossed Hillsborough Road safely under his watch.

â€œEach morning, he gave a boost to every child and parent who walked through his crossing to McDougle, then did it again that afternoon,â€ said John Mader, a nearby resident whose children attended McDougle. â€œAnd when my son and daughter made their way to Chapel Hill High School and UNC, he was there with a wave for me whether I passed by on a jog or in my car.

â€œWhat a difference that high-five, a smile and a good heart can make.â€

Members of the Chappell family said in an email that they will miss Burnette, who always made an effort to know each child and was â€œfiercely protective of everyone who crossed his path.â€

â€œThere will never be another crossing guard as kind and friendly as James,â€ said 9-year-old Crosby Chappell.

â€œI loved this human contact with a friendly school official,â€ she said. â€œHis ready willingness to literally connect with every member of the school community inspired hope for this institution which can be depersonalizing in the mad dash to meet government-mandated metrics.â€

Elisabeth Allore, whose children attend McDougle, noted Burnetteâ€™s across-the-board camaraderie with all members of the community.

â€œIt just didnâ€™t feel right on the days that he wasnâ€™t there, and it certainly isnâ€™t going to feel right now,â€ she said. â€œHe will be sorely missed.â€

Funeral services were held Sunday at Second Baptist Church in Chapel Hill, and Burnette was buried at Westwood Cemetery in Carrboro.