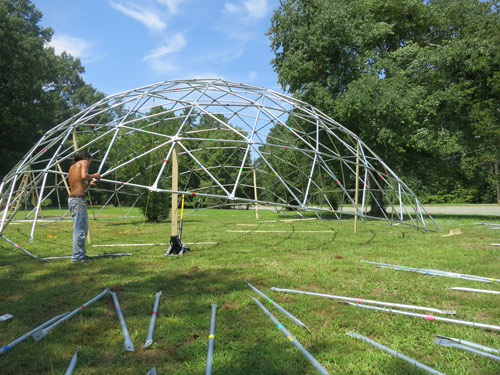 
Heading out Hillsborough Road near McDougle School earlier this month, you may have noticed an odd structure â€“Â a geodesic dome crafted entirely of raw metal tubing â€“Â but almost as soon as the dome appeared, it was gone.

The deconstructed, 47-foot dome has since made its way out to Black Rock Desert, Nev., where it will be restored to its full glory for Burning Man, an annual art event and temporary community that comes together as a sort of festival, running Aug. 27 through Sept. 3.

This will be Carrboro resident John Quickâ€™s fourth trip out to the festival, and his second with a group of about 20 other locals. Quick and a couple of friends built the dome outside of a home on Hillsborough Road earlier this month as a test run, and last week they took it apart and packed it up.

Those who have never been to Burning Man might wonder why one would construct such a structure, but Quick said there are structures all over the festival serving a variety of needs.

Last year, Quick and friends built a smaller, 32-foot dome that they covered with a parachute to use as a shade structure.

â€˜This year weâ€™re going to be using it as more of a venue,â€ Quick said, complete with a bar and a stage. The festival requires that attendees participate in some way, with 10 principles outlining things like inclusion, self-expression and civic responsibility.

â€œYou feel obligated to do something for the people around you, or build something or create something, or present yourself in some fashion,â€ he said.

While in Carrboro, the structure drew a lot of attention from curious passersby, Quick said, much like the smaller dome, which he set up outside his home on Old Pittsboro Road this past spring.

â€œWe met a lot of our neighbors due to it being there,â€ he said.

Quick, a carpenter who has lived in Carrboro for three-and-a-half years, said he hopes to fabricate and build unique structures as his full-time profession one day.