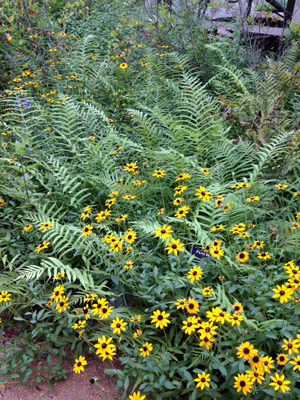 
As nursery manager at the North Carolina Botanical Garden, I periodically venture out of my containerized world and into the various habitats and landscape displays the horticultural staff have worked so hard to establish and maintain over the years. And I am constantly surprised by the amazing succession of cool blooms, leaf shapes and plant forms.

Though the next big spectacle in the garden will occur later this fall, there are still many native plants in bloom or fruit that warrant attention. For instance, today as I walked through the green cattail gate towards the Totten Center, I was immediately drawn to the right, where bright yellow black-eyed Susans (Rudbeckia fulgida var. fulgida) lined the grit path in front of the arching, light-green fronds of southern shield fern (Thelypteris kunthii).

Next I wandered to the entrance of the Sandhills habitat to check on one of my favorite plants, scarlet wild basil (Clinopodium coccineum). Its almost neon-red tubular blooms, similar in appearance to those of salvias, were still sporadically present. This plant has been in bloom constantly since late spring and adds a nice splash of unexpected color.

Now procrastinating, I decided to explore more on the southern side of the Totten Center and immediately stepped on a soft, slippery fruit that looked a bit like a small potato and oozed light-orange pulp. It was a ripe paw paw (Asimina triloba) fruit. Some describe the fruit as having the taste and texture of something between a mango and a banana. Everyone with enough space in their yard should grow some paw paws!


Pressing on, I decided to head once again through the cattail gate and into the new Piedmont habitat garden occupying what was once part of Laurel Hill Road. There, six different species of native sunflowers (Helianthus spp.) and two species of rosinweed (Silphium spp.) branched over top with dozens of small, bright-yellow flowers. Equally grand was the mix of airy ornamental grasses, such as hair grass (Muhlenbergia capillaris) and little bluestem (Schizachyrium scoparium), with a variety of smaller herbaceous perennials blooming in shades of pink, purple and white. Species included in this floral display were obedient plant (Physostegia virginiana), scaly blazing star (Liatris squarrosa), stemless ironweed (Vernonia acaulis) and wild quinine (Parthenium integrifolium).

And then it struck me, as I found myself at the edge of the daily plant sale area on the west side of the Education Center â€“ the fall plant sale is less than three weeks away. (See the gardenâ€™s website for details at ncbg.unc.edu). Yikes! I better get back to work!