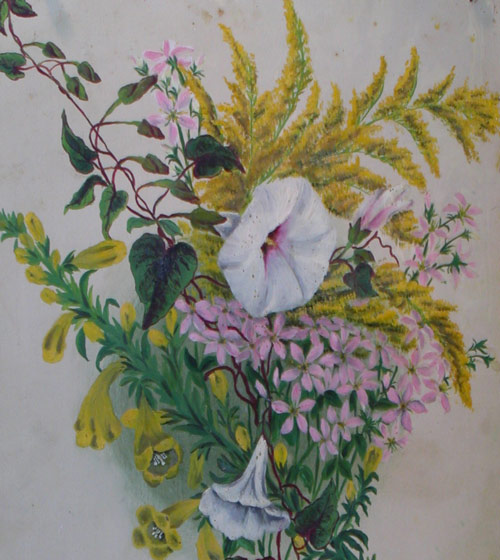 Appropriate to accompany her description is the beautiful botanical fall bouquet pictured above, one of several botanical paintings of Mrs. Spencer, carefully preserved in UNCâ€™s Southern Historical Collection.

The painted bouquet includes a stem of yellow goldenrod, Solidago, emerging through a bundle of rose-pink, Sabatia, locally common wildflowers recently featured in Flora. One may still find lingering at the base of an oak tree a yellow false foxglove, Aureolaria, which is semi-parasitic on roots of oaks. The twisting white-flowering vine is man-root, Ipomoea, clamoring over roadsides everywhere just now.

Almost 150 years ago Mrs. Spencer could have been exploring the forest edge of Old N.C. 86 to collect this lovely bouquet.


Spencer arrived in Chapel Hill as an infant in 1826 when her father relocated from Harlem, N.Y., to serve as chair of the universityâ€™s mathematics department. She left in 1855 as the happy bride of university graduate James Monroe Spencer to live in Clinton, Ala., until her return as a saddened widow in December 1862.

Thenceforward she directed her knowledge and passions to educating her daughter, June, and helping local residents of all walks of life. From 1870 to 1875, she badgered the stateâ€™s legislature with passionately eloquent letters until it reopened the university, which had been closed during Reconstruction.

The day proclaiming the reopening was made momentous by Cornelia Spencer, â€œthe lady who rang the bell,â€ tugging on the cords of the South Building bell that had been silenced for years.

Fortunately the letters, diaries and columns written by this energetic lady about life in our region during the last quarter of the 19th century were preserved.

Her powers of verbal expression and the beauty of her paintings of our local flora are worthy of sharing here.


â€œWe are not as familiar with our woods now as in the spring. But just before frost has fallen on them, while summer luxuriance yet remains, though with a touch in the air that allows walking to be a pleasure for the first time in two months, they are full of beauty and full of delights. The persimmons are a light yellow, oneâ€™s mouth involuntarily screws when we look at them â€“ black haws are yet pink â€“ the locusts are still green â€“ the maypops have not begun to shrivel … But, oh! The grasses and ferns and the gay fall flowers! The fall fashions and colors are as various and ever more vivid than those of spring. â€¦ There are many varieties of goldenrod. I am never tired of gathering them when they first appear, for every golden plume I see seems more enticing than the last. When the tips are yet in bud, is, on the whole, its most beautiful stage.â€

Indeed, as Mrs. Spencer described so long ago, some goldenrods have already flowered while others only now are showing a tint of gold. Go see for yourself!

[For the entirety of these descriptions, see Selected Papers of Cornelia Phillips Spencer by Louis R. Wilson, UNC Press, 1953.]