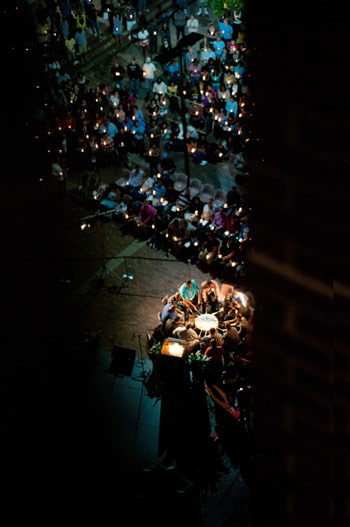 
Nearly a week after the murder of 19-year-old UNC student Faith Danielle Hedgepeth, police have yet to announce a cause of death.

Hedgepethâ€™s family and friends and members of the UNC community gathered at a candlelight vigil in The Pit on the UNC campus on Monday night to celebrate her life, which was cut short Sept. 6. Hedgepethâ€™s body was discovered by friends around 11 a.m. on Friday in her apartment in the Hawthorne at the View on Old Chapel Hill Road, according to police.

Police have said they do not believe her death was a random act.

â€œWeâ€™re still waiting on a report from the medical examinerâ€™s office before we can discuss what the cause of death may have been,â€ Chapel Hill Police Sgt. Joshua Mecimore said Wednesday. Mecimore said police had received a number of calls into a tip line that investigators have been following up on.

At the gathering on Monday, hundreds of mourners filled The Pit to hear remembrances from those close to Hedgepeth, while a screen projected photographs of her, most of which showed her smiling. The vigil was organized by the Carolina Indian Circle and Alpha Pi Omega Sorority.

Hedgepeth was deeply involved in college life, especially in the universityâ€™s American-Indian community as a member of the Haliwa-Saponi American-Indian Tribe in Warren County. She came to UNC as a Gates Millennium scholar, receiving a full scholarship through the program, which seeks to promote academic excellence and provide an opportunity for 1,000 outstanding minority students every year.


Marcus Collins, assistant dean of the Center for Student Success and Academic Counseling and Summer Bridge director, said he first met Hedgepeth during her very first week at Carolina as part of the Summer Bridge program. He spoke of Hedgepethâ€™s positive impact through her mere presence and encouragement of those around her.

â€œWe must challenge ourselves to be just like her. â€¦ She has had and will continue to have lasting positive impressions on this campus,â€ he said.

Collins said he had a hard time figuring out what to say at the event.

â€œIn some ways, I think Faithsaid it best. For many of you, you know what she would tell us â€“Â â€˜Just have faith,â€™â€ he said.

UNC Chancellor Holden Thorp urged the community to reach out to one another and to counselors for support in the wake of Hedgepethâ€™s death.

â€œFaith was a student, a friend, a talented and bright young person who inspired those who knew her. â€¦ She was one of us,â€ Thorp said, adding, â€œIt is important that we take care of each other.â€

Consuela Richardson, Hedgepethâ€™s cousin, noted all that Hedgepeth brought to this world as a daughter, sister, aunt, granddaughter and much more.

â€œAll of this has been taken from us. Our hearts are heavy because we just canâ€™t make sense of any of it,â€ she said.

Richardson recounted how she had been shocked by the deaths of other young women, including UNC Student Body President Eve Carson. News of Hedgepethâ€™s death was all-too familiar for many members of this community who still feel the effects of her 2008 murder.

â€œWe say, â€˜I canâ€™t imagine how this family feels,â€™ and then it happens to your family,â€ Richardson said.

Richardson said that while she was older than Hedgepeth, she always looked up to her younger cousin.

Police are asking anyone with information related to the investigation to call (919)614-6363 or Crime Stoppers at (919)942-7515. Callers can remain anonymous. On Wednesday, the UNC Board of Trustees announced a $25,000 reward for information leading to the arrest of the person or persons responsible for Hedgepethâ€™s death. The Haliwa-Saponi Tribe and Hawthorne at the View also pledged $1,000 each to the reward fund.