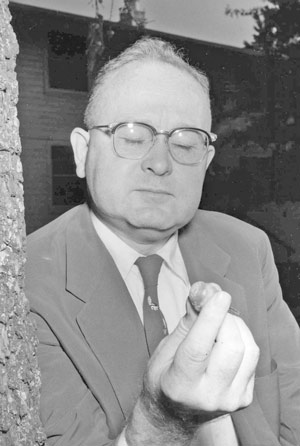 
Every year during â€™simmon season, I remember â€œPersimmon Peteâ€ Ivey, who for 20 years was director of the UNC News Bureau. Pete died back in 1975, and though during those years I remember folks talking about Peteâ€™s persimmon recipes, I never met him and Iâ€™m sad about that.

And every year during â€™simmon season, I also remember Roland Giduz, lifelong Chapel Hill resident, 14-year member of the Chapel Hill Board of Aldermen and longtime photographer, reporter and columnist for theÂ Chapel Hill News Leader. When Roland died in January 2009, our towns lost a wonderful friend, a man who so enthusiastically kept the community personalities, traditions and stories alive in our consciousness.


Following Peteâ€™s death, Roland carried on the â€œpersimmonryâ€ tradition, going so far as to initiate a campaign to have the persimmon declared the state fruit. Sadly, not enough enthusiasts gathered around that cause. The scuppernong grape (Vitus rotundifolia) was declared the official State Fruit in 2001. But scuppernong is a vine, so itâ€™s appropriate to pick up the torch and lobby for the persimmon to become our official State Native Fruit Tree.

In the meantime, persimmons will be dropping fruit into November, so find yourself a tree and make daily visits to collect those ripened fruits from the ground before the possums and other critters beat you to it. Make certain the persimmon is ripe, soft to the touch; youâ€™ll never put an unripened one in your mouth a second time!

Most folks use persimmons for pudding and bread recipes or beer. I prefer simply eating a ripe one as it is, and the pure pulp makes a great ice cream topping. Save the flat, long-oval, dark-brown seeds and plant them in the ground where you want your own persimmon trees. Plant several seeds some feet apart, for you need male and female trees if you want fruit.