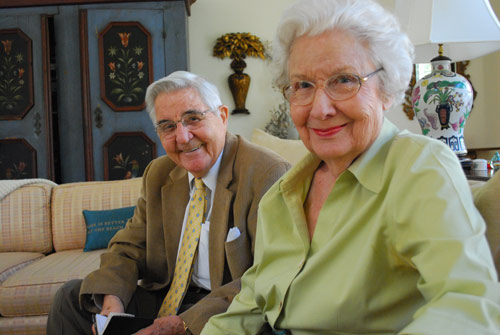 Tucked away on a side street near campus, William Friday â€” who is approaching 89 â€” keeps watch on the happenings around the university from the home he shares with his wife, Ida.

Having spent 30 years as president of the UNC system, he maintains a close relationship with Chapel Hill and the entire university system.

He oversaw the integration of UNC in 1955, as well as the general admission of women in 1963. He led the system through its reorganization and consolidation in 1971, and quietly helped the student body fight the Speaker Ban Law in the early 1960s.

But these days, as he observes the school from his post near campus, Friday is able to spend a bit more time focusing on the â€œenjoyment of things,â€ as he calls it.

On one of the first truly warm days of spring, he awaited my arrival outside his home, seersucker-clad, enjoying the late-morning sun. As I outstretched my hand in greeting, he pointed to a flowerbed.

â€œCome over here for a minute,â€ he said, leading me to the side of the yard. Gesturing to a particular patch, he smiled and said, â€œI think these are about to bloom.â€ Last year, he told me, a late frost had prevented the blooms
from opening, so heâ€™d kept a close watch on them this year.

We entered his home â€” a bright, well-kept, airy place â€” and Friday explained that Ida was out walking. He spoke of her fondly, pointing out her pottery and various other pieces of art scattered around the house. The two have been married for 67 years, but he still has a sparkle in his eye when he speaks of her, or of the three daughters theyâ€™ve together raised.

Just nine weeks before our meeting, heâ€™d undergone open-heart surgery to replace a valve that was closing due to calcification. At first, he couldnâ€™t figure out why he was suffering from such an ailment â€” he doesnâ€™t drink much, walks a fair amount and hadnâ€™t messed with tobacco in 40 years.

â€œYou learn new words â€” stress, organized exercise, state of mind. I found out that I was completely, utterly exhausted.â€

A child of the Great Depression and a soldier in World War II, Friday is part of a generation that learned what stress was at an early age.

Raised in Dallas, N.C. in Gaston County, Friday recalls feeling the strain of the Depression when he was 10 years old.

â€œI knew enough to understand that something was happening, and I saw how hard it was on my parents. We lost the house, just like people are losing homes today. My dad was working for almost nothing, and we borrowed bread across the fence.â€

After attending N.C. State University, Friday served in the U.S. Naval Reserve, stationed at Norfolk and then Charleston. Just a few days back from the service, he began law school at UNC.

â€œThat was about the worst mistake I ever made, trying to learn to study all over again after four years of war,â€
Friday recalled. Still, like many of his classmates â€” including the likes of former Gov. Terry Sanford and former UNC Chancellor William Aycock â€” he graduated in two years.

â€œNot a single member of our class failed that bar exam,â€ he boasted, noting the plaque honoring the class of 1948 that hangs at the law school. â€œIt was a wonderful group of post-war people…. Weâ€™ve sort of stuck together over the years and kept up with each other. Now weâ€™re disappearing pretty fast.

After graduating from law school, Friday became the assistant dean of students at UNC, and several years later, in 1956, the president of the UNC system. The university was a vastly different place when he arrived â€” an enrollment of 6,575, with general admission open only to men â€” than it was when he left. The sprawl of South Campus was a few years yet to come, and with it, a considerable expansion of the student body.

While president, Friday certainly worked through a fair amount of adversity, as the university opened its doors to students of all races and both genders and the system consolidated to include all state-funded higher education institutions.

His work in the early â€™60s with student body President Paul Dickson and other students to abolish the Speaker Ban Law drew fire from politicians and the UNC Board of Trustees.

(In the interest of full disclosure, I must reveal that I feel a particular connection to those events here on the hill, as, though he died at the age of 30, in 1971, before I was born, Paul Dickson was my uncle.)

Friday and Dickson met secretly to discuss the studentsâ€™ strategy to work toward abolishing the law â€” which prevented known communists from speaking on campus â€” after Friday made an unsuccessful plea to the board of trustees. The pair would meet at the rock wall that circles the presidentâ€™s house on Franklin Street and â€œjust sit out there and have a conversation.â€

Threats against free speech periodically rear their ugly heads, most recently in the student protests against anti-immigration speaker Tom Tancredo, and the university is again reminded of the studentsâ€™ fight for the right to hear from whoever chose to speak.

â€œThatâ€™s the vitality of the university. The issue has to come up. What you learn each time is just how important preserving it really is,â€ Friday said. â€œI err on the side of letting people speak, and thatâ€™s why we stood so hard for the abolition of that law…. If we stand for anything, we should stand for that, back to back, all of us.â€

The enjoyment of things

Itâ€™s been many years since Fridayâ€™s retirement from the presidency, and many more since the Speaker Ban controversy. And while his involvement with the university continues, these days Friday busies himself with a different set of activities, heading out to the Carrboro Farmersâ€™ Market every Saturday morning, participating in campus forums and filming his TV show, â€œNorth Carolina People.â€

This spring, Friday was a bit less active than usual as he recovered from heart surgery but still managed to get out on occasion, once to see the Alvin Ailey Dance Company perform at Memorial Hall.

â€œThatâ€™s a part of the dimension of my life that I havenâ€™t done enough of â€” doing things for the enjoyment of them,â€ he said. â€œThe music, which I dearly love â€” I donâ€™t know a thing about it, but I have a great sense of appreciation for it â€” theatre and things.â€

When he returned to his TV show a few weeks ago, Friday took a break from his regular routine of interviewing others to tell his own story, recounting the events surrounding his heart surgery.

â€œLet me tell you, you never get too old to be nervous and frightened,â€ he said. â€œWhat you learn is what a magnificent instrument the human body is, even at my age.â€

Friday hopes to work with his doctors to educate people about the symptoms of heart diseases and to increase awareness about the various contributing factors.

â€œDoctors are for the first time really realizing how much stress really does play in certain diseases,â€ he said. â€œThereâ€™s no question in my mind what effect it has.â€

Friday traces his heart malfunctions all the way back to his youth, to the stress he felt in the Depression and then in World War II. By the time he became president of the UNC system, he already knew what the strain of hard work felt like.

â€œThe stress that I felt in the job in some dimensions was not equal to the other two,â€ he said. â€œThere were times when we had as many as three if not four [controversies] going at the same time, and thatâ€™s when you worked 14 hours a day. I think these prior experiences had conditioned me physically to do it.â€

But Friday emphasized that no one is at his best when working long hours under such stress.

â€œIâ€™ve grown to believe when you work six and a half, seven hours, you need to get away. I think in our culture now, weâ€™ve lost something. Weâ€™ve lost the sacredness of the weekend. Sunday, in my boyhood, was a very special day. It was quiet. You got to go swimming, something like that. You didnâ€™t work.â€

Our conversation passed at a leisurely pace; Friday didnâ€™t seem rushed in the least. Though heâ€™d told me prior to our interview that he had to make a doctorâ€™s appointment shortly after our meeting, I wouldnâ€™t have known heâ€™d had any other engagement â€” it was like passing the time with a treasured family member. Eventually, he walked me back out into the sunshine.

Reflecting on a long career in the university system, and an even longer life, Friday offered these words:
â€œLearn the lesson of pacing yourself, and save room in your life for the goodness thatâ€™s around you that will sustain you. If you walk around this yard and look at all the flowers, youâ€™re not thinking the same thing you did when you started walking over here. Well, thatâ€™s why theyâ€™re there.

â€œBut then multiply that by music and friendship and conversation like this. Thereâ€™s a richness to life that work destroys.â€