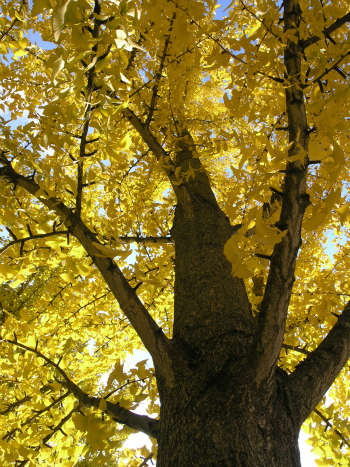 By Carol Ann McCormick
Guest Flora Columnist
1. Theyâ€™re old â€“ really old. The earliest gingko trees were found in the Middle Jurassic (180 million years ago), and the seeds were probably dispersed by carrion-eating dinosaurs. Since the Jurassic there have been about a dozen species, but only Ginkgo biloba is alive today, and since we are sadly lacking in dinosaurs, it now depends on humans for dispersal.

2. Ginkgo biloba is more closely related to pines than to maples and oaks. (For botany wonks, it is a gymnosperm in its own division, Ginkgophyta.) An individual tree is either male or female, and depends on the wind, not insects, for pollination.

3. An individual tree can live 1,500 years! Ginkgo biloba is native to China and the oldest trees are found growing near temples. Monks did not ascribe any religious significance to the trees, but appreciated them for their longevity, beautiful leaves and edible nuts.

4. Ginkgo seeds have a squishy outside (â€œsarcotestaâ€ for those studying for the SAT) containing hexanoic and butanoic acids, so they smell like rotten flesh or vomit (remember the carrion-eating dinosaurs in 1?). However, the interior â€œnutâ€ is not stinky and is used in Asian cuisine. Margo MacIntyre, curator of the Coker Arboretum, reports that the seeds are avidly harvested by visitors. (She also asks that you not leave a pile of sarcotesta right by the bench where other people want to sit and enjoy the ginkgo foliage.)

6. Ginkgo trees are remarkably resistant to disease and tolerant of air pollution, so they are an excellent choice for urban environments. Because of the aforementioned malodorous fruit, usually only male ginkgos are planted.

7. Despite cultivation for 200-plus years in America, there is scant evidence of gingko naturalizing and becoming a weed.

9. The University of New Hampshire has annual contests to Pick the Day the Ginkgo Leaves Fall (winner gets pizza) and Catch a Ginkgo Leaf (winners get good luck for the year). â€œTheyâ€™re actually quite difficult to catch,â€ says UNH student Mary Dellenbaugh. â€œBecause the leaves are fan-shaped, their falling pattern is very erratic. As soon as you think you have it in your hand, it darts out of reach.â€


10. Go find a ginkgo! There are two mature trees (one male, one female) along the north edge of the lawn in Coker Arboretum on the UNC campus. Between Hanes Art Center and Kenan Music Hall there is a new allÃ© of 20 trees, and UNC Forester Tom Bythell promises, â€œIn a decade when these trees are mature, this will be the place to be when the leaves turn gold.â€