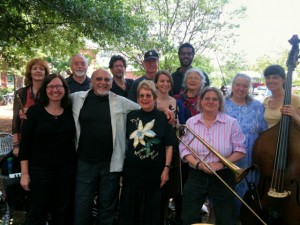 For fourteen years now musicians have come together to share their mastery of Klezmer, Jazz, polka, brass band, and classical music under the banner of Magnolia Klezmer. The group, typically twelve to fifteen members strong, is as apt to play in full force as in quartet. They’ve headlined weddings, benefits, bat mitzvahs and even spent a few afternoons under the trees on Weaver Street’s lawn.

Holding it down on drums, bass, and contra bass balalaika, (Dr. and bona-fide Duke professor) Elliott Mills surely knows his way around a dance beat (and a research lab)…but can he handle our five question assault? See for yourself after the jump! 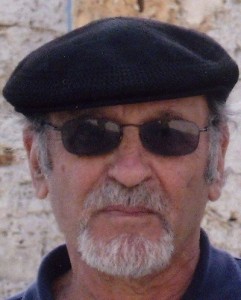 Iâ€™m tempted to say Freudâ€™s â€œPsychopathology of Everyday Lifeâ€, but Iâ€™ll pick a discovery book, Darwinâ€™s “Voyage of the Beagle.” In 1831 they put out a crew-call for a voyage of biological discovery; in 1994 we put out a musician-call for a voyage of discovery in Klezmer. The Beagleâ€™s crew had a variety of skills and backgrounds applicable to the voyage. Our musicians too had a variety of backgrounds/skills but not in Klezmer. Darwin discovered new species and variations, the Magnolias discovered new musical scales, modes and instrumental techniques.

2. What do you hope listenersâ€™ discover through your music?
After two minutes listeners discover that Klezmer is upbeat, joyous music. After that I hope they come away with the realization that there is more to musical â€œRootsâ€ than is included in the current hegemony of blues, bluegrass, folksong and Jazz.

3. Describe the dynamic of playing in such a large group.
Organized chaos. Because Magnolia exists in different configurations, quartet to 10 plus vocalists, the logistics of rehearsals are boggling. We do a lot of improvisation not chordal/melodic as in Jazz, but harmonic and ornamentation. To avoid massive polyphony with the big band, we need to be able to hear each other; and monitoring is a recurrent problem.

4. Who/what might be a few inspirations or influences that would really surprise people?
Though Iâ€™m a drummer, what really opened my ears was something said by Thelonius Monk. He told his drummer Frankie Dunlop to â€œplay in the spaces.â€ My world view is Marxist (Groucho that is).

5. What did you dream of being when you were a kid? (how â€™d that turn out?)
Maybe my analyst took more detailed notes. I do recall a football player, Doc Blanchard, the drummer Gene Krupa (I wore out my 12â€ 78 of Sing, Sing, Sing) and the scientist Robert Koch, discoverer of the TB bacillus (I read and reâ€read â€œThe Microbe Huntersâ€ by Paul DeKruif). I became a scientist and a drummer: two out of three is not bad.

Click on over to The Magnolia Klezmer homepage to find out more about the band and their upcoming show schedule. And by all means, give Elliott a high five when you see him!

I love the piece. Elliott did his usual witty erudite job except for the last sentence in paragraph 1. We’ve played at Weaver St. Market jazz brunch dozens of times, not occasionally!

Magnolia Klezmer rocks and theorizes. Freud, Monk, Groucho… you’ve got it all. And rhythm, at which Freud failed utterly.