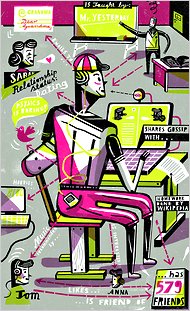 In case you needed another tale or set of tales to illuminate the data from various Pew studies on youth usage of email verses their use of other alternatives, Katrin Bennhold writes of her experience with a teen at Davos and various teens from her old high school, the Ratsgymnasium in Osnabrück, Germany,in “Generation FB” published both in the New York Times and in the International Herald Tribune on June 23.

Bennhold finds that even cool teachers are out of touch, kids are facile in when they cheat, teen girls can be mean girls, kids work hard on their presentations of self, teachers complain that students don’t listen and can’t sit still, and kids complain that teachers are boring and don’t make their subject relevant. In other words (in Bennhold’s words):

At my old school I was struck by how much teenagers have changed. But I was also struck by how little the school had changed, and I dont think its an exception. Teachers are right to fret about attention deficits and lazy thinking. But no fundamental rethink seems to have occurred about how teaching and learning should take place in the age of social networking.

The problem is with adults, says Leo.If they say were becoming more stupid, its perhaps because were in a school system they invented.

In the meantime, Emily Bazelon writing in the New York Times Magazine warns us not of the Nanny State but the “Ninny State.” The Ninny State, says Bazelon is seized by juvenoia a specific kind of Moral Panic caused by an exaggerated fear about the influence of social change on children. (quoted texts from David Finkelhor who has changed his position from his 1988 stance). Bazelon likens the various instances of panics about sexting, abduction, and violent video games to the comic book panic of the late 1940s and early 50s.

Okay Bazelon’s article isn’t so much about email or #noemail as it is about our reactions to our technologies and our kids. It’s a good companion piece to Bennhold’s article describing the over-reactions to change that the teachers at the Ratsgymnasium are expressing.

[Is it just me or does the name Ratsgymnasium immediately bring hamster wheels to mind?]