At some point just before Halloween of 1996 someone began rolling foil candy wrappers up in a ball. A few months later, in January of 1997, the size and growth of The Ball started to be recorded on a website.

Fans of The Ball sent in wrappers and were acknowledged on the website, as The Ball grew its measurements were recorded on the growth chart. StarDOT technologies donated a WinCamOne Digital Camera for the photos.

The internet was different in 1997, a new and interesting media to be explored, it was dynamic and interactive – still in the ‘what can we do with this’ phase. It hadn’t yet replaced print media to the extent it has today (New York Times went online in 1996 ).  Certainly not as ubiquitous. Definitely not mobile. Most of us were still dialing in.  The first photo on the internet was just 5 years previous.

The Ball was popular at the time and was noticed by many. The Ball was chosen as a ‘Pretty Strange Site’ by Yahoo! Internet Life (a print magazine about the internet), and was reviewed in Netsurfer Digest. The Ball was even mentioned in an early June 1997 ‘This American Life’ episode titled ‘Tales from the Internet’ (link from the ‘This American Life’ archive ). Ira Glass mentions “all the hype about the revolutionary changes the internet is going to bring us… .”

I reached out for an update and you’ll be glad to hear that The Ball is still around. Current measurements are: 1853g or so, circumference 376mm, diameter of 120mm, so about the same size as a CD. Photo below is the ball as of 4/13/2020. 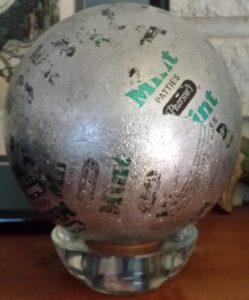 If you find yourself with some extra time on your hands head on over to Project Gutenberg and check out these suggested plague readings. Project Gutenbuerg offers over 60,000 free e-books in various formats.

“Project Gutenberg has a large selection of plague related titles for free download, including The Decameron (Boccaccio), Journal of the Plague Year (DeFoe), The Scarlet Plague (Jack London), The Last Man (Mary Shelley), Plague of Pythons (Frederik Pohl), Plague Ship (Andre Norton), History of Epidemics of Britain (2 volumes) and my favorite “The Virtue and Use of Coffee With Regard to the Plague and Other Infectious”
https://www.gutenberg.org/ebooks/search/?query=plague“

Before emojis, memes, gifs, or even photos on the internet, there were icons. Enjoy this icon browser circa 1994-1995.
http://www.ibiblio.org/gio/iconbrowser/