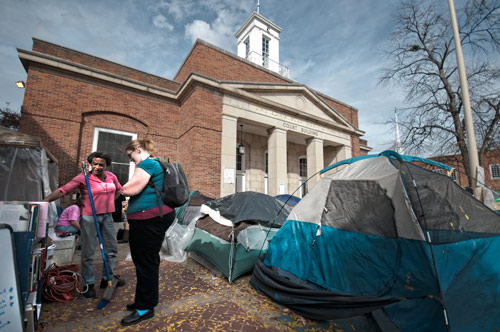 By Taylor Sisk
Staff Writer
In the aftermath of an incident in which a group of some 70 people occupied the former Yates Motor Co building at 419 W. Franklin St., questions have been raised about these individualsâ€™ connection with the Occupy Wall Street movement, and a broader dialogue has ensued about the aims of those in this community who identify with the movement.

Concerns have also been raised about the policeâ€™s response to the occupation of the Yates building.

The incident at the building, a former Chrysler dealership, began Saturday night, led, reportedly, by attendees of the Carrboro Anarchist Bookfair, and resulted in a dramatic encounter with police Sunday afternoon, with seven arrests.

A statement issued by Occupy Chapel Hill said the takeover was neither discussed nor authorized by Occupyâ€™s general assembly; rather, it was an â€œautonomous action by a group of people, many of whom do nevertheless identify as part of the larger Occupy Wall Street Movement.â€

The statement also expressed outrage at what it called the â€œdisproportionate and disturbing use of force by the Chapel Hill Police Department.â€

At a press conference held at Chapel Hill Town Hall on Monday, police Chief Chris Blue read a statement that said, in part, â€œAccording to the intelligence we gathered, there were concerns that our law enforcement officers would be met with resistance, including possible violence. Individuals who have engaged in the take-over of private property in other cities have been known to barricade themselves in, place traps in buildings and otherwise destroy property.â€

The press conference drew a number of the protesters who occupied the Yates building, and both Mayor Mark Kleinschmidt and Blue were heckled repeatedly as they read statements to the crowd and answered questions.

Protesters held signs reading â€œCops: Army of the 1%,â€ â€œCivility? Not with police on our streets!â€ and â€œWe are not intimidatedâ€ as they stood in the back of the room, shouting at Blue and Kleinschmidt that the police raid was violent and caused psychological injury.

â€œ[The reporter] was treated like anyone else who was outside the front of the building at that point,â€ he said.
Kleinschmidt said he was concerned about the detainment of the reporter and that he had asked the town manager to investigate it.

Chosen weapons
Kassandra Ofray, one of the protesters who was arrested on Sunday, said police made no attempt to contact the group before rushing into the building.

Blue confirmed that police did not attempt to have a dialogue with the people inside the building prior to entering, other than the policeâ€™s initial entry into the building and encounter with the group on Saturday night, which police determined to be threatening.

â€œWe had no sense of what threat might lurk in that building, although we certainly did have concerns based on the â€¦ materials we had gathered,â€ he said. â€œWe were operating on the information we had gleaned from watching the group as well as the encounter we had.â€

When asked about the weaponry used, which included long-range rifles, Blue said various weapons are selected for certain tasks based on the situation.

â€œThat is a tool that we use in a variety of applications, thankfully in this community not very often,â€ he said.

Carrboro Mayor Mark Chilton said he might approach such a situation differently.

â€œI would have gone for providing a little more warning to the people inside the building,â€ he said, while adding that he didnâ€™t know all the details.

Regardless, he said, Chapel Hill responded in a manner thatâ€™s in accordance with the law.

â€œThere were certainly people in the Yates Motor Company building that believe in the nonviolent struggle for social change, but there were others who expressly do not,â€ he said.
â€œI think itâ€™s a very difficult problem for the Occupy Chapel Hill General Assembly to deal with,â€ he said. â€œThe ground rules of the general assembly call for the broad inclusion of people who have a wide array of political and philosophical beliefs.â€

Differences
Reactions to the occupation of the building among Occupy Chapel Hill members have been varied.

Amanda Ashley, an Occupy Wall Street protester and Carrboro resident, said that â€œideally these sort of approaches are reconciled within our general assembly.â€

â€œAs in any political movement, there are differences of approach,â€ Ashley said.

However, she noted, â€œWeâ€™re all one group. We are united.â€

â€œIf the open dialogue between the police department and Occupy had continued, I think this could have been resolved in a much more peaceful manner.â€ Occupy Chapel Hillâ€™s relations with the police had been positive, she said.

Michal Osterweil, a lecturer at UNC, longtime Chapel Hill-Carrboro resident and an active Occupy Chapel Hill participant, said she believes the occupation will help bring a discussion of certain issues to the table, among them, the use of public space and abandoned property.

â€œOut-of-town landlords can hold on to private property, incurring very little costs, while buildings that could be put to potentially good uses that would better serve the public good stand abandoned,â€ Osterweil said.

While certainly legal, she said, â€œGiven poverty, homelessness and a general need to have vibrant communities accessible to all,â€ a question is raised of whether â€œthe legal corresponds to the moral or ethical.â€Â

The occupation of the building has sparked a lot of conversation at the Occupy Chapel Hill camp about differences within the Occupy movement, said Lila Little, an Orange County resident who said sheâ€™s been coming to the camp for three weeks.

â€œItâ€™s given Chapel Hill more opportunity to talk,â€ Little said, â€œand people are more willing to stop by here and talk with us.â€

â€œI think they got off kind of light considering what they did,â€ an occupier who goes by the name Sign said of those arrested. He said he believes the police did what they deemed necessary to secure the building.

But, he added, â€œI feel comfortable saying that I associated with a number of them that were in the building, and even now I am not going to disassociate with them because of what happened.

â€œHearing about things that have worked or not worked in other occupations, both in the U.S. and globally, has been an important part of our process.â€

â€œI would also say that we stand in solidarity with these movements,â€ Osterweil said, â€œalthough we obviously recognize that each occupation has its particular strengths and weaknesses, and even problems.â€

She said efforts have been made to meet and network with nearby occupations.

Issues raised by occupiers across the country include a lack of oversight of Wall Street, wealth disparity, unemployment, the high cost of education, foreclosure rates and globalization.

Still, the movement faces criticism, and concerns from many who are generally sympathetic, that it has failed to clearly articulate a policy platform.

â€œWhen we think about movements, we tend to think of mobilized people fighting for a clear set of objectives, usually demands they place on those in power,â€ Osterweil said. That, she said, is not the case with the Occupy movement.

â€œThis is in large part because the broader movement sees the failures of the economic system to be closely linked with a dysfunctional and even corrupt political process, especially at the national level.â€

Making demands of the political system would suggest that the movement has faith in that political system, Osterweil said.
But one of the reasons the Occupy Wall Street movement is thought of as â€œagenda-less,â€ she said, is because itâ€™s concerned with â€œsystemic issues and, at this point, the most necessary and potentially radical thing the movement can do is to simply reveal the systemic nature of those problems and get people talking about them and potential solutions.â€

Many in positions of influence are taking note. In an op-ed piece last Sunday for the New York Times, economist Jeffrey Sachs wrote, â€œThose who think that the cold weather will end the protests should think again. A new generation of leaders is just getting started. The new progressive age has begun.â€

â€œWe are on the cusp,â€ said Osterweil, not simply of a social movement with a clear-cut set of demands, but of a â€œâ€˜society in movement,â€™ in which ideas, problems and the unjust practices of corporations and politicians cannot simply take place without hundreds of thousands ready to respond.â€

Susan Dickson and Rose Laudicina provided reporting for this story.