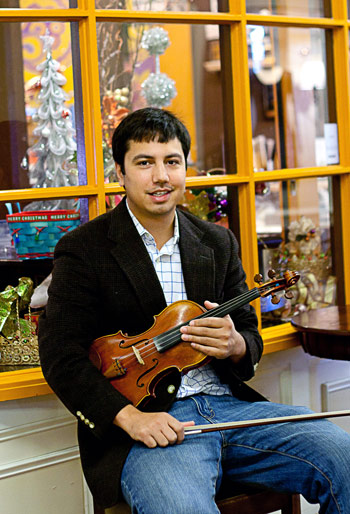 By Taylor Sisk
Staff Writer
This is the first in a three-part series on the onset of psychosis in young adults, its treatment and UNCâ€™s Outreach and Support Intervention Services program.
[OASIS series main page]

â€œMy heart and brain are in concert,â€ David Binanay says.

But there was a time, not so long ago, when Binanay felt as if cleaved to his core. Such is the nature of his illness.

The road on which Binanay, 28, has traveled has been switchbacks and straight ahead, then around again and on. It started out rough: a congenitally troubled heart. He endured four open-heart surgeries, the first while in preschool, before graduating from Cardinal Gibbons High School in Raleigh in 2001.

But that was just a thing, the heart trouble, something he was born to live with.

He survived and thrived â€“ became class president, school president, top of his class, a talented violinist. He attended Villanova University, where he made deanâ€™s list and was elected vice president of his fraternity while earning a degree in the humanities.

His senior thesis was titled â€œI found a continual aesthetic experience through music, and through music Iâ€™ve discovered the meaning of life, which is to love.â€

Binanay returned to the Triangle in 2006, joined a band and took a job at Chapel Hill Violins.

But then it all went haywire, and in a great big hurry.

In writing his thesis, heâ€™d studied a number of philosophers, and remembers an analogy equating life with being at sea, amid a fog, â€œand there are two ways you can take it,â€ he says. â€œYou can be really scared, or you can hear the soundtrack playing, and be, like, this is an amazing adventure, and Iâ€™m surrounded by the fog.â€

â€œThatâ€™s how it had been for me,â€ he says, â€œan amazing adventure. I would face death and not be scared. There was a fog around me, but I was living the adventure, and loving every second.â€

Now though, something had happened, and he saw his hands â€“ these hands that so skillfully traversed the violin â€“ for the first time.

â€œIâ€™d trained myself to be removed, like I was truly adopting nonattachment. Then when I had my schizophrenia, I awoke to my hands.â€

Binanay now wonders if the effects of schizophrenia were visited upon him, or perhaps worsened, by â€œall that pain that was built up from my surgeries. Itâ€™s just an idea.â€

Therapists, he says, have told him itâ€™s plausible.

â€˜The beginning of wisdomâ€™
Schizophrenia translates, roughly, as a â€œsplitting of the mind.â€ Itâ€™s most commonly first diagnosed in older adolescence and early adulthood. There is no cure, but itâ€™s treatable, especially if confronted early.

Binanay had known success his entire life. Heâ€™d performed with the Raleigh Boychoir in Carnegie Hall and at the White House, done well in school and been popular.

Now his life was unraveling, and it was terrifying, and exhilarating. It was spiritual. Heâ€™d grown up a practicing Catholic. But this was a â€œheightened spirituality; it was like everything was spiritual, and it was running through all things.â€

â€œI didnâ€™t know what was happening to me,â€ he says of the first days and weeks of his psychosis. â€œI was being re-created. â€¦ I went from where I wasnâ€™t sensing anything to 100 percent sensory overload. It was like â€¦ it was intense.â€

He wanted it to stop, and he didnâ€™t.

He was institutionalized for the first time. Medication became a part of his life â€“ a source of dispute with his parents â€“ on and off the meds. They dulled his senses, for better and for worse, to his mind.

Binanay pauses in conversation, and listens. A train whistleâ€™s blowing, and it triggers a memory.

â€œAnd a sound has the power to evoke.â€

Heâ€™d begun to listen, was hearing things. Not auditory hallucinations; just things being uttered, perhaps in a whisper. He couldnâ€™t make out what, specifically, was being said, but, he now says, â€œthereâ€™s still some kind of understanding.â€

The world out there
When David Binanay first came to the Outreach and Support Intervention Services (OASIS) program, administered by UNCâ€™s Center for Excellence in Community Mental Health, in Carrboroâ€™s Carr Mill Mall, he had, he says, the stare â€“ â€œthe psychosis stare.â€

He had awoken, he says, â€œto the magnificence, to the exuberance that my paper was aboutâ€ â€“ his college thesis â€“ â€œand the fog was lifted.â€

â€œI was, like, whoa, thereâ€™s actually a lot out there in the world, and I was scared.â€

So too were his parents, who stood by him throughout. Compliance with his meds came in fits and starts, and eventually took hold.

â€œI had fear for the first time in my life,â€ he says, â€œbut they say fear is the beginning of wisdom.â€

His mind was split open, and he was coming from a place in the heart. His work with OASIS had begun.

3 thoughts on “Awakening to what lifeâ€™s about”