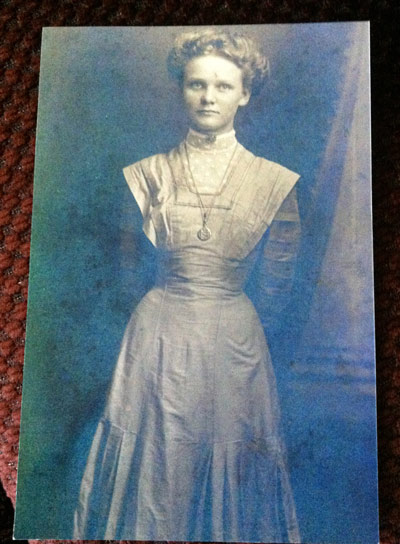 The power of old family photographs cannot be overstated. Given time, images from the past take on iconic status as they shed light on our history in a most personal way. Hereâ€™s a lovely example sent in by Linda Woodard of Chapel Hill, with the accompanying backstory: â€œThirty-plus years ago I traveled north with my parents and my motherâ€™s oldest sister to visit 5 of the Dowdy cousins, four in the Philadelphia area, & one in northern New Jersey. In one home, boxes of old pictures were shared as a testament to the closeness of all those cousins. I picked up the original of this in wonderment at the beauty of the girl, then amazement as I read the words written on the back: â€˜For Brother Nat & Jim, From little sister, Mary V. Dowdy. Taken August 25,1910.â€™ There were 8 siblings raised in the tiny mill village of Ca Ira, Va. They had an older half-brother, Harry, who would inherit the family farm, so Nat and Jim left as young men to seek their fortunes in the big city of Richmond. Jim later moved to Philadelphia. Mary Virginia met my eventual grandfather, Owen F. Ginn (from Greene County, N.C.) while he was attending Massey Business College in Richmond. He was invited to an ice cream social in the Church Hill neighborhood. Though she arrived at the party with someone else, he walked her home that night. They married in September of 1913. He later told his children that her waist was so tiny he could span it with his hands.â€ After two children were born, the Ginns moved to Goldsboro, where Mary had five more children. When WW II broke out, their eldest son, Cleveland, joined the Merchant Marines. Linda picks up the narrative again: â€œMotherâ€™s Day in the Ginn household became the â€˜High Holy Dayâ€™ of the year, after the 1942 return of the oldest son, Cleveland, on May 10. Despite his having been reported missing and presumed dead following the sinking of the Merchant Marine oil tanker, the T.C. McCobb, in the South Atlantic, he came home just ahead of the telegram informing the family of his rescue and recovery.â€Â