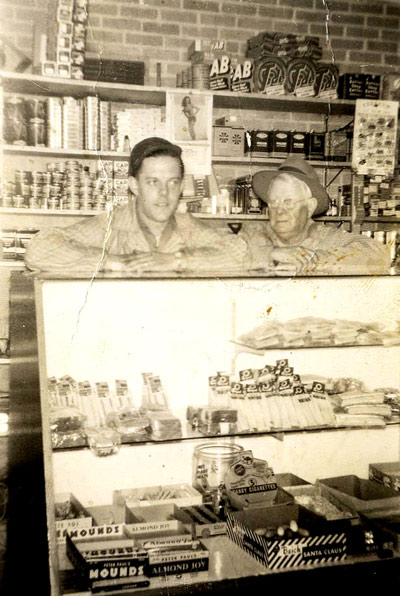 Citizen reader Don Pendergraft sends in this delightful image from 1955, titled â€œWelcome to Elmerâ€™s,â€ along with the following narrative: â€œElmer was my father and passed away suddenly in 1977. In his brief time he lived through hard times and experienced some really good times. He was well known for his gentle wisdom and friendly and outgoing personality. On the left is Elmer O. Pendergraft, owner-operator, and Pap Andrews, friend-volunteer clerk in Pendergraftâ€™s Service Station, ca. 1955. Elmer O. Pendergraftâ€™s Service Station sat on West Franklin Street in the current location of Alâ€™s Garage. Elmer Pendergraft and Ben Grantham opened the business in 1949. They had been employed at Eben Merrittâ€™s Gas Station on Pittsboro Road. Elmer was a younger cousin of Merritt and Ben married Ebenâ€™s daughter. After WWII they decided to start a similar business between Chapel Hill and Carrboro to serve both communities as well the University. Pendergraft bought Granthamâ€™s holdings after several years and was sole owner until his death in 1977. Pap Andrews was Raymond Andrewsâ€™ father. Raymond was co-owner of Andrews and Rigsbee Hardware and Ford Tractor Dealer in Carrboro. Elmer was an active merchant in Carrboro declaring his allegiance by having attended Carrboro School (now town hall) as a young boy. The residents in Tin-Top, a small community behind the station on Brewer Lane and the adjoining neighborhoods on Merritt Mill Road, were frequent customers. The â€˜stationâ€™ was a gathering spot.â€

Editorâ€™s Note:Â After working in Elizabeth City for 19 years, Don Pendergraft moved back home this summer and now lives on Barbee Chapel Road in Chapel Hill. He is the design section chief at the North Carolina Museum of History.