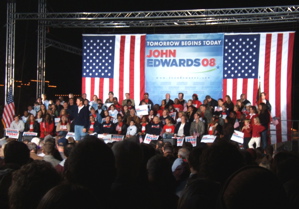 Pretty big rally on the green tonight. A long wait (never known a political rally to start on time). Couple of quick notes on Edwards and his themes:
Get involved. He promised a “very different campaign” that takes action now. “Take action to change America. . .We’ve got to take it by the horns and bring the change America needs.”

Restore the country’s moral leadership.
“Where is the America we all believe in?”

Called for the country to lead again in respect for individual rights and liberties.
Here’s the clip.

On the war:
“I say to all of you, I reject categorically any escalation of this war.”
Says he rejects this “McCain Doctrine” of a surge in troops.
Says, we need to make it clear to the Iraqis that we are leaving.
“Best way to make that clear is start leaving.”

Spoke out on Darfur, Uganda and AIDS in Africa. On the lack of AIDS drugs to prevent mothers from passing it on to their children.
“How can the richest nation stand by and watch this happen.”

Called on the country to kick the foreign oil addiction, to change our habits, to do something about Global Warming on a personal level.

Called for moral leadership through universal health care, fighting poverty, by allowing workers to organize. “If anyone can join the Republican Party just by signing a card, they should be able to join a union the same way.”

2 replies on “Edwards rally in Chapel Hill: Where is the America We All Believe in?”

Thanks for posting this, Kirk! Good to see your latest project taking shape.

[…] Interesting look at the revenue implicationsâ€”seriously fudged as they areâ€”of the decline of the minibottle in South Carolina. The switch to free pour 1.5 ounce shots rather than the 1.7 ounce bottle mayâ€”mayâ€”be leading to a drop in revenue. It’s also making bar owners happy and causing patrons to speculate about the strength of their drinks. Dude, if you can taste the difference between 1.5 ounces of Jack in your Jack and Coke and 1.7 ounces then you are some pro barfly. I once wrote an essay about the implications of the 10-ounce beer, which was test marketed in New Orleans when I was living there in the mid-80s. The can was slightly smallerâ€”kinda like playing a 3/4 scale guitar. It really did feel unnatural when you went to pick it up. The main point of my irritation, though, was that the reduction in beer turned a six-pack into a five-pack, which I declared un-American. We won that battle, by golly. (clears throat) In other news; â€¢ Capital Beat takes a look ahead â€¢ Black watch: Greg Flynn has a take on the speaker race and the capital rumor mill â€¢ New lobby laws kick in. Can’t wait to start publishing those reports. â€¢ NC’s Minumum Wage rises to $6.15 an hour. â€¢ Don’t know ’bout y’all, but I heard the phrase McCain Doctrine on Saturday in Chapel Hill â€¢ Speaking of the rally, I have to say the Edwards folks didn’t do the fastest job of cleaning up after themselves. The new neighbors sure bring a lot of excitement, but they need to sweep up the confetti. […]