Before it all went wrong – Did Errol Morris’ brother invent email? #noemail

Film maker Errol Morris discovers that his brother Noel may have been, along with Tom Van Vleck, one of the first implementers of a mail command in 1965.

Among the many nice touches associated with the article is an interactive feature that allows you to send mail as if you were using the MIT CTSS system from a Selectric Typewriter terminal and even do a little programming.

Morris promises that this article will be the first of a five part series. I’m looking forward to see what more he and Tom Van Vleck have to say.

The proposal for the mail command (see below) is particularly interesting in that it states a couple of uses for email. First, the system could automatically “notify a user that some of his files had been backed-up.” And second, that email could be used “for users to send authors any criticisms.” No other uses are mentioned.

One feature that has just reappeared as Google Priority Mail is URGENT MAIL. Mail from the system to “the user will always be placed in a file called URGENT MAIL.” The MAIL ME command which presents the user with the contents of her inbox “will always print the URGENT MAIL before [the more pedestrian mail file] MAIL BOX.”

There at the very beginning, email was already a box clogger, already a place where priorities needed to be established automagically for the user, and already with some guiding suggestions about use that would quickly be ignored. 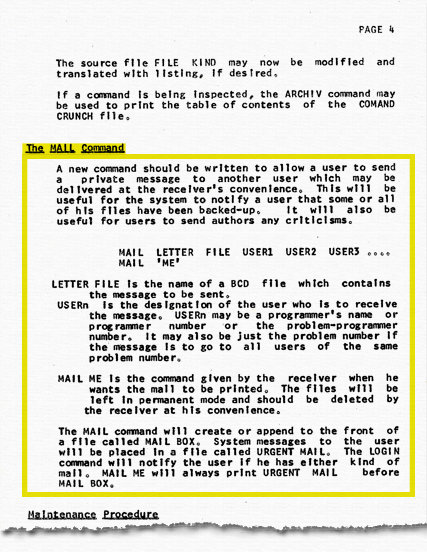