LONDON: Woody Allen has been in six cities in the last three weeks. He is tired and lonely and anxious to go home. But before this can happen, he has to run the London media gauntlet.

He must attend receptions for the press where there are free drinks and a bunch of fresh bananas on each table and talk to ladies who write for the women's page. He must do radio interviews, appear on TV talk shows and deal with an earnest crewcut Japanese reporter who speaks no English but has a pretty girl interpreter along who insists on snapping pictures of the two together for her scrapbook (the reporter beaming; Woody staring.)

If he lives through it all, Woody Allen gets to fly back to New York City and start work on his next film and all of it gradually will come to be no more than a blurred memory of tape recorder microphones being waved at him and people scribbling away in notebooks every time he opens his mouth to speak.

Should he, however, die in the process, well... at least it'll be publicity for Bananas, the commodity being marketed. 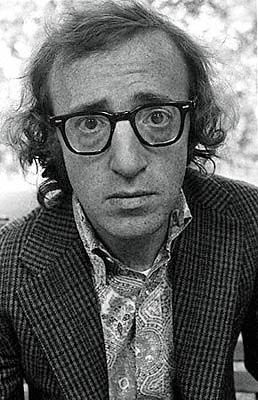 INTERVIEW ONE: "Woody Allen," a radio interviewer says into his microphone, "You're a film director, a musician, a scriptwriter, an actor, and a comedian... which of these roles do you prefer?" "Yes," Woody says succinctly. "Yes which?", the interviewer asks, eyeing his precious tape time rolling away. "Yes, all of them. Whichever one I'm not doing." "I, ah see. And how do you get your ideas?" "They come to me all at once," Woody says, completely deadpan, like a highly intelligent mouse talking to the cat in a Disney cartoon. "I see the opening credits unfold and then the first scene... and then the rest of it." "You mean you see all of it at once?" "Yes." "How long does that take?" "In the case of Bananas, eighty-two minutes." "All of it at once?" the interviewer asks, incredulous. "Yes," Woody says. "You're not sending me up, are you?" "No," Woody says seriously, "Not at all."


On to Interview Two