In his green carpeted suite at the Dorchester Hotel, Woody Allen is sitting quietly on a large couch awaiting the next interviewer. His press lady is on the phone trying to find him a late night flight back to New York. Charlie Joffee, Woody's friend and business partner and the executive producer of Bananas is prowling around, chewing on one of the Bolivar Habana cigars he wears in the corner of his mouth, looking out windows.

Woody is wearing his basic outfit for the week, worn bell bottom jeans with a dark blue patch on the ass, a quiet plaid sports jacket, and black and white saddle shoes. His red hair is long in the back, it whirls out over his collar from around a central bald spot. With his freckles and horn rimmed glasses, he looks like he could be an entering freshman at some great mid western university. He's 35.

"I hope all this sells the picture," Charlie grumbles from around his cigar. "It won't, Charlie, it won't," Woody says quietly, "It won't make any difference at all."

"Three weeks we're having this argument," Charlie tells the room, in an aggravated voice. He sighs. "Three weeks. And I'm starting to think maybe he's right." 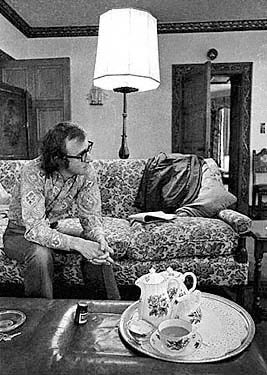 INTERVIEW TWO: "You're often portrayed as a loser in your films, Woody... Are you?" "I was. Now, I'm a winner." "What happened?" "It's a strange story," Woody says, shifting into total fiction, "I was originally the son of a Presbyterian minister. Then I became an atheist. It might seem strange but two years ago I found religion again... Judaism." "How did that come about?" "Well, it's a difficult story to tell, I ran into some Jews... and they seemed happy... so I took on a Hebrew name, Yitzhak." "And how do you spell that exactly?" "Y---i---t---h---Chak."


On to Interview Three