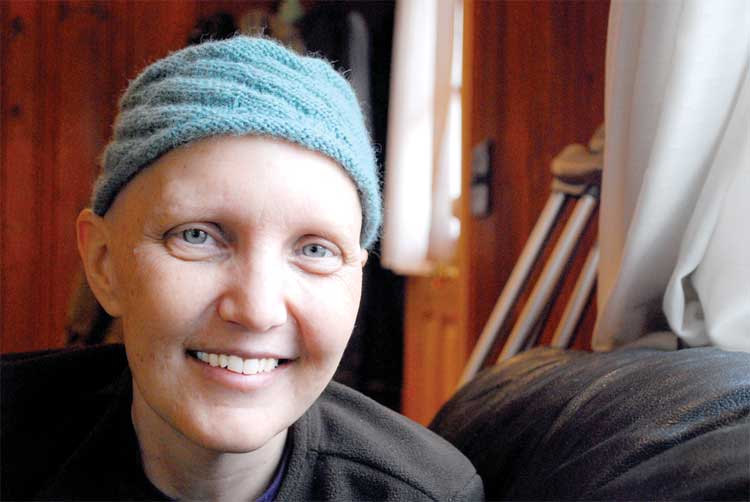 Ashley Osment confronts cancer and the merits of positive thinking

Ashley Osment isnâ€™t by nature a book-burner. In fact, last month the Chapel Hill-Carrboro branch of the NAACP presented its Dr. Martin Luther King Jr. Community Service Award to Osment, a civil-rights lawyer, for having spent her adult life defending the constitutional rights of any and all to live, work and express themselves reasonably undeterred.

But Bernie Siegel, author of the 1986 bestseller Love, Medicine & Miracles and coiner of such mass-consumed aphorisms as â€œThe simple truth is that happy people generally donâ€™t get sick,â€ makes Osment want to undo it all. After reading one of his books, she says, â€œI just wanted to have a book burning, of Bernie Siegelâ€™s positive thinking.â€

Not that she ever would. But that she would even consider book burning is testament to the anger Osment sometimes feels, unapologetically, at the twisted victimization to which people with cancer are routinely subjected: The suggestion that if you arenâ€™t getting better, itâ€™s your own fault, and the attendant commercialization, the commoditization, of her cancer.

â€œThere are just all these demeaning, very gender-based symbols,â€ Osment says of all the pink ribbons and cuddly bears. â€œâ€˜Hold this and think positively, because, damn it, you caused your own cancer by not being positive.â€™ That really [ticks] me off.â€

â€œI think that you can be miserable,â€ she says, â€œand itâ€™s a mistake to let your misery define your last experience on Earth.â€

There are ways, Osment believes, to express the pain and fear, the despair in contemplating the very real possibility of your 13-year-old daughter growing into womanhood without you along to witness and guide â€“ to carry all those things and allow them to comingle with, and better inform, the joy and wonder and vast awareness of yourself that has emerged from this experience. Thereâ€™s room for it all.

And while Osment â€“ 46 years old and two years, eight months now with cancer â€“ can appreciate the good intentions behind the admonitions she receives most every day to â€œkeep fighting,â€ she would like to make it known that despite how she may verbalize it, she is fighting â€“ that six rounds of conventional cancer therapies, chemotherapy and radiation; and the alternative treatments, the high-dose intravenous vitamin C, massive ingestions of nutritional supplements, the fermented soy and repeated fasting â€“ that these should be pretty clear indications that sheâ€™s fighting like hell.

Sheâ€™ll smile when she can and when she pleases. She smiles quite often. But sheâ€™ll grimace when the pain in her hip, where the cancer has now spread, overwhelms her, as it has persistently for months now. Sometimes positively, at others pessimistically, she ponders her reality, and hereâ€™s how sheâ€™s come to see it:

â€œYou can take two identical cancer patients, with the identical cancer, have them do identically the same thing, and their outcomes will be really different,â€ Osment said in a video produced by the UNC Lineberger Comprehensive Cancer Center, where sheâ€™s received much of her care. â€œThe most positive person in the world could kick over in two months and a curmudgeon lives for 20 years.

â€œSo this whole thing about mind over matter, I think, misses the mark in terms of the complexity of the enemy here.â€

Cancer fights dirty. On July 2, 2007, when Osment was first diagnosed with carcinosarcoma, a rare and aggressive form of ovarian cancer, she was told her chances of recovery were nine in 10. On July 30, 2008, her CT scan revealed a metastasis to her lungs. â€œThe summary is that the news of my cancer recurrence brings a statistically bad prognosis and an indefinite future of cancer treatment,â€ she wrote to friends at the time. â€œI have too many tumors for surgery, so chemotherapy â€“ carboplatin, taxol and avastin â€“ are the conventional things Iâ€™m throwing at this.â€

â€œThe news was unexpected,â€ she said recently, in the Chapel Hill home she shares with her husband, civil-rights attorney Al McSurely, and daughter Sunny. Sheâ€™s propped gingerly on the living room couch, an unsuccessful attempt at alleviating the incessant pain in her hip. Her eyes burn â€“ the fire of Ashley Osment that everyone whoâ€™s known her knows well, now refined. â€œThey had told me I had a better than 90 percent chance of no recurrence, because my cancer was caught very early.â€

In the Lineberger video, Osment spoke of the occasion of learning she had cancer as a â€œdiscreteâ€ event.

That was the lawyer in Osment speaking. â€œIn the law,â€ she explains, â€œa discrete fact is an isolated thing.â€ Being the practical, purposeful person that she is, that would be the way she would view it â€“ as a thing to be dealt with and discarded.

But it would pretty much change everything.

â€œI basically donâ€™t even remember life before cancer,â€ she says. In fact, sheâ€™s no longer even certain who that woman in the Lineberger video is, the Ashley Osment of several treatments ago.

Is she angry? â€œIâ€™m furious.â€ How so? â€œYou name it. I mean, itâ€™s stolen everything. Itâ€™s going to steal me from my daughter.â€

Sunny is fully aware of what her mother is living. Thereâ€™s no hiding it. She knows how many milligrams of Oxycontin her mom takes. She and her mom are very connected. Osment couldnâ€™t deceive her if she wanted to.

â€œI used to be a little more confident that it was just making her stronger,â€ Osment says of Sunnyâ€™s experience with her motherâ€™s cancer, â€œand now Iâ€™m worried that itâ€™s getting traumatic. Itâ€™s gone on too long, and Iâ€™m just getting beat up. And I worry. Itâ€™s not like a household with domestic violence, but itâ€™s traumatizing.â€

But Osment wants her daughter to learn from this that she can survive cancer â€“ she doesnâ€™t want her to think everybody with cancer dies â€“ a complicated message to convey. The everyday, concrete things are salvation. There are bookshelves, built by a friendâ€™s husband, soon to be lined with books that influenced Osment and her friends between the ages of 13 and 23. And anticipation over whether Sunny will make the McDougle Middle School soccer team; no easy feat.

Cancer arrived in Osmentâ€™s life just as she was coming into her own in her work.

â€œI had figured out how to be a lawyer at McSurely & Osment, and had really reached my stride when I moved over to the law school.â€

In 2005, she took a position at the UNC Center for Civil Rights, where â€œmy marching orders at the Center for Civil Rights were general and massive.â€ Osment was charged with building the center into a regional hub for advocacy, litigation and research in addressing school desegregation in the 21st century. â€œSo there was just so much work to be done, and I was just one person, so you have to get really skilled at prioritizing what you do and who you do it with, and I was just starting to figure all that out. So that got stolen from me. It was a job I was born to do.â€

Perhaps sheâ€™ll yet recover. But Osment equates the probability of being cured by the modalities currently being used as roughly â€œequivalent to spontaneous combustion. I hate to say that. But I donâ€™t believe my saying it makes it so.â€

Osmentâ€™s assessment of her prognosis doesnâ€™t keep her from volunteering for clinical trials. Sheâ€™s open to the possibility that some new therapy will be discovered that will save her life or lead to treatment that saves lives in the next generation, â€œAnd Iâ€™ll be all over that like a dog on a bone.â€

And there are places she sometimes goes to explore her own healing potential.

â€œA friend of mine brought over an anatomy book full of beautiful drawings by this Japanese artist of body parts. And Iâ€™ve looked at the body parts where my cancer is.â€¦ And so when I meditate, I think about those places getting well, and not hurting.â€

She acknowledges there are contradictions to her approach. On the one hand, she says she doesnâ€™t believe we yet understand the relationship between the brain and healing. â€œThere are plenty of people who are very skilled meditators who die of cancer. I guess what Iâ€™d like to do is not be hampered in any way in my exploration of meditation practices, and at the same time not be asked to give up my utter disdain for any blame being put on a cancer patient for their condition. I think everything is dumb luck. Even if maybe you figure out some meditation technique or connection that heals you, itâ€™s dumb luck.

â€œThereâ€™s just so much opportunity to blame the victim, and thereâ€™s no more vulnerable population than people who have cancer and are sufferingâ€¦.

â€œThe idea that you would be flat on your back and then be blamed for it at the same time is just unconscionable.â€

And the notion of going gently? â€œYou read, â€˜Emma Grace died of cancer â€¦ and not once in five years did she ever complain.â€™ How is that possible? I just donâ€™t get it. I cannot imagine not complaining about all the insults and injuries of cancer. What would lead you to not complain?â€

In the Lineberger interview, Osment said: â€œMy personal style is not to repress the anger or the depression or the fear, but to not let it become the defining quality of how I live my life as a person with cancer. I really do my very best to acknowledge those feelings, but then do what I can do, right now. So thatâ€™s different. Because it used to be I think I would indulge my emotional extremes, before cancer, more than I indulge them now. Now I donâ€™t have time; I donâ€™t have time and I also donâ€™t have the space for the emotional hit of living in the bad moments. They do happen. Theyâ€™ve got to happen. I let them happen.â€

Awhile back, Osment wrote to friends, â€œI will do anything and everything I know to do to stay alive for as long as I can. But I also want to prepare for a peaceful death, whether itâ€™s this year, next year, or years far in the future.â€

â€œOnce you have cancer, you have a full-time job,â€ the Ashley Osment of seven months ago told her Lineberger interviewer. â€œBut on top of that, youâ€™ve got the reason you were put on this Earth. I wasnâ€™t put on this Earth to fight cancer.â€

â€œWhat is the fight?â€ Osment asks today. â€œI think the presumption is that if I donâ€™t have a strong will, itâ€™s going to get me; but if I do have a strong will, it slows the cancer down. I donâ€™t know that thereâ€™s any evidence to support that. At some point, youâ€™re just being kept alive to be bullied around some more with another medical procedure.â€

For now though, bullying it will be; the treatments continue. There will be days of rage at whatâ€™s been taken, and days of elation for what life yet holds: Sunny made the soccer team.