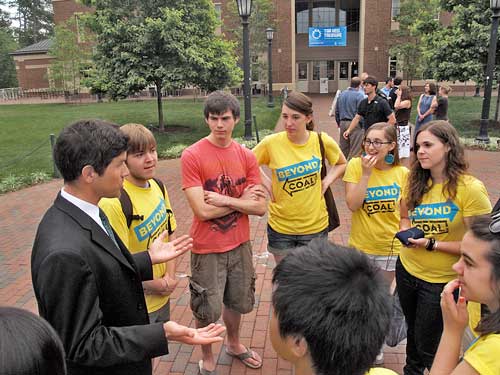 UNC â€” Flanked by representatives of the Sierra Club and North Carolina Energy Policy Council chair Tim Toben, Chancellor Holden Thorp announced Tuesday that the university intends to end its use of coal at the Cameron Avenue co-generation plant in 10 years.

Starting with tests this spring with wood pellets, the university will gradually shift away from coal, phasing it our entirely by 2020. The plan was put together over the past six months by a university task force comprised of students, faculty, energy-systems managers and Sierra Club representatives.

Speaking atop the green roof of Rams Head Plaza, Thorp said universities should take a leadership roll in finding solutions to a conversion to renewable fuels.

â€œUniversities must lead the transition away from fossil fuels to clean energy,â€ the chancellor said.

Bruce Niles, who heads up the Sierra Clubâ€™s national Beyond Coal campaign, hailed the decision as a significant first victory in the environmental organizationâ€™s effort to get 58 universities nationwide to stop using coal as a fuel.

Thorp praised student organizers for their approach to the effort. The result, he said, was a productive dialogue and a workable solution.

Toben said the universityâ€™s commitment and the speed with which it worked is an example for others. He cited an email sent to him Tuesday morning by NASA scientist and climate-change authority James Hansen, who spoke about coal use on campus in February.

â€œUNC-Chapel Hill is a model for how students and a university can work together with a civil constructive approach to ending our national addiction to coal. It is good to see a university demonstrating the rational approach to problem solving,â€ Hansen wrote. â€œWe need to somehow overcome the uncivil discourse that has infected current politics.â€

Ray Dubose, director of the universityâ€™s energy services, said in addition to major technical concerns, such as the effect of the new fuel on the furnace, there is as yet no established supply for the fuel.

The energy task force did hear from possible suppliers setting up in Virginia, but finding a source of fuel is one of the biggest unknowns about the conversion to biomass. The university also is entering the market as energy suppliers around the state are contemplating similar moves, Dubose said, making it difficult to estimate costs. For now, the goal is to use biomass for 20 percent of fuel consumption at the plant within two to five years.

While the conversion is tested, Thorp said the university is negotiating a new round of coal contracts. He said the university would attempt to seek assurances and third-party verification that coal used at the plant did not come from mountain-top mining, another concern raised by the Sierra Club.