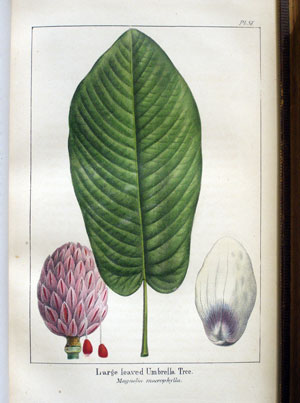 Under the auspices of the French government, botanist AndrÃ© Michaux explored the former English colonies from 1785 to 1796. His principal mission was to find new tree species to reforest the French countryside, which had been depleted for shipbuilding during wars with Great Britain.

His tireless travels, with numerous excursions across North Carolina, including the environs of Hillsborough, provided a wealth of new plants for both the French and British gardening world. One of the standouts of the new American plants is bigleaf magnolia, Magnolia macrophylla, which was introduced to France in 1800 and flowered in Empress Josephineâ€™s garden outside Paris as early as 1811.

Iâ€™m happily obsessed with this tree â€“ and though Iâ€™ve featured it in past Floras, Iâ€™m describing it again because on April 30 youâ€™ll have opportunity to see it in the wild, in the very vicinity, near Gastonia, where Michaux saw and studied it and introduced it to his son, FranÃ§ois AndrÃ©.

Famed botanical illustrator Pierre-Joseph RedoutÃ©â€™s image of this magnolia, pictured above, graces multiple editions of FranÃ§ois AndrÃ© Michauxâ€™s North American Sylva, based on his fatherâ€™s earlier Flora Boreali-Americana, field notes and his own additional observations from two American visits between 1801 and 1808.

Retired Charlotte librarian Charlie Williams is more obsessed with bigleaf and Michaux than I am. I have heard that Charlie has visited every known wild location of bigleaf in North Carolina and nearby states where it occurs.

After several years of scholarly studies of Michauxâ€™s journals and herbarium specimens, Charlie unraveled the puzzle of where Michaux discovered populations of bigleaf in North Carolina. Michaux also found it in Tennessee, where he collected the specimen that accompanied his official naming and description of Magnolia macrophylla. Though bigleaf had been described several years earlier by famed American pioneer botanist/explorer William Bartram in Alabama, where it still occurs, Bartram called it something else and never officially described it as a new species. Michaux is unquestionably the father of bigleaf magnolia. Charlieâ€™s research is published in Castanea, Journal of the Southern Appalachian Botanical Society, Vol. 64, No. 1, March 1999.

Fortunately, though bigleaf is rare, it is easily propagated by nurserymen and is available to the gardening public. More importantly, a number of the natural populations are protected, though not readily accessible to the public.

Now hereâ€™s your opportunity to see it in one of the original natural settings: Redlair NatureFest, Saturday, April 30, 11 a.m. to 4 p.m. (catawbalands.org/naturefest2011). Itâ€™ll be a great family outing just a couple of hours away.

Sabine and Haywood Rankin have made a conservation easement of their 730-acre Redlair farm and natural area to the Catawba Lands Conservancy. NatureFest is an annual event open to the public to explore the treasures of the land as well as to enjoy a day of kids activities, music and local artisans, from beekeepers to blacksmiths. You may choose among numerous themed walks, including one with botanical historian Charlie Williams, who will certainly describe AndrÃ© Michauxâ€™s discovery of â€œthe tree.â€

Thereâ€™s so much more to know about bigleaf! Attend NatureFest to learn firsthand, and have fun doing it!

1 thought on “In the footsteps of AndrÃ© Michaux”