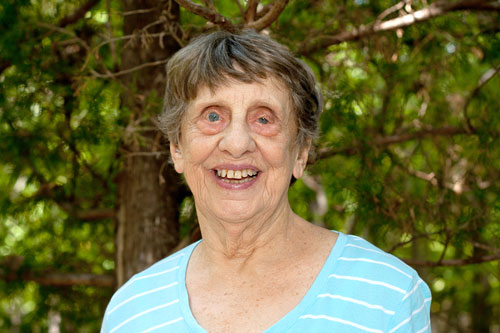 Words never fail Daphne Athas, not for long. If the right one isnâ€™t immediately at hand, off she goes, on to another, seemingly unrelated but altogether integral topic, only to return, just when you thought youâ€™d lost your way, to the word in question.

Perhaps itâ€™s one from her own collection â€“ among which â€œhokery-pokery,â€ â€œpickery-upperyâ€ and â€œlookity-downâ€ are to be found.

Athas doesnâ€™t break the rules; she rewrites them in an idiom her own and inclusive. In the legendary creative writing classes she taught at UNC for four decades, she accosted grammar and lifted its wallet. Her stylistics class was originally called â€œGlossolalia,â€ roughly translated from its Greek origin as â€œspeaking in tongues.â€ In it, she encouraged her students to explore the flexibilities of language, to experiment with grammatical style and rhythm, using a variety of innovative exercises, including performance art.

She published a book called Gram-o-Rama: Breaking the Rules (well, OK, so maybe she does break a rule here and there), in which she carried forth her lessons to the masses.

Former student Dave Krinsky, now a writer for King of the Hill, wrote of the book, â€œBeware, Gram-o-Rama is a dangerous book. It takes the cautions and rules of grammar and drops them into a fun house. â€¦ You could make a movie of this book. Or at least a theme park ride!â€

How about a theme park ride modeled on Daphne Athas? Many whoâ€™ve had the pleasure of conversing with Athas in her nearly 88 years have tried to describe the experience â€“ but none, Iâ€™ll wager, have entirely succeeded.

I arrive at her home in Carrboro with half-a-dozen or so roughly sketched questions and three full hours to expend. Four hours later, Iâ€™ve neglected to glance at my list.

We meander from Aesopâ€™s Fables, through LSD, to Michelle Bachmann and Xenophon. We chat briefly about the movie Pumping Iron, the arc of Arnold Schwarzeneggerâ€™s career, PACs and their influence, wampum, heritage, the Duke of Wellington and money supplanting standing.

Words bridge the divide (a slender one, Athas will tell you) between reality and myth. Words are the portal to a world of possibility.

â€œFrom the very beginning,â€ she says, â€œI believed in literature, and thatâ€™s what I was about.â€

Sheâ€™s made beautiful music of language, and that songbook is always before her.

The subject was mythology.

â€œMy father talked at the dinner table about Aesopâ€™s Fables,â€ Athas says, â€œabout the myths. He talked as if they were real, so they were real.â€

From the beginning, she says, â€œI wanted to be a writer.â€

By her mid-20s, Athas had published her first novel, The Weather of the Heart. In 1971 came the somewhat autobiographical Entering Ephesus, which was selected by Time Magazine for its Ten Best Fiction List for the year.

Last year brought Athasâ€™s long-awaited â€œsocial memoir,â€ Chapel Hill in Plain Sight: Notes from the Other Side of the Tracks.
For the cover of the book, the late Reynolds Price wrote: â€œThe richness of vision in Daphne Athasâ€™s fiction has led many of her readers to hope that we could someday read a collection of her essays â€“ Daphne speaking directly to us in Daphneâ€™s own voice. Now, in Chapel Hill in Plain Sight, we have exactly that; and a joy it is to read.â€Â

The book begins with Athasâ€™s 1938 transplantation from a storybook New England childhood to a shack, dubbed by Athas and her family â€œThe Shack,â€ at the top of Merritt Mill Road in Chapel Hill.

(â€œI was glad that our Shack was technically inside the Chapel Hill limits,â€ she writes, â€œwhich spared me from the onus of being from Carrboroâ€ â€“ though Carrboro would soon have magic to share.)

There she grew up with her two sisters and brother, with pleasures that surpassed the hardships. Athasâ€™s father, a stockbroker, had lost his money in The Great Depression. He wanted an education for his children, knew it could be had inexpensively in North Carolina, and, moreover, had been told by a man up North that Chapel Hill was the Athens of the South.

Pan Constantine Athas was a Greek immigrant, a graduate of Harvard Law School, an eccentric and an explorer.

â€œHe nosed around,â€ Athas says. â€œMy father explored everything. â€¦ Heâ€™d just walk anywhere and talk with anybody. Be equal with anybody. He didnâ€™t consider himself lower or higher than anybody.â€

The Athas household was â€œthe bohemian thingâ€ to all comers, from university professors and students to ambitious young sons of Carrboro millworkers, like Wayne Williams, Athasâ€™s first boyfriend.

â€œI didnâ€™t belong to cliques,â€ she says of her place in local society. â€œI didnâ€™t fit into any of them. I was acceptable to the top cliques, but I wasnâ€™t that Sweet Briar type.â€

She and Williams â€œgrooved on feeling like criminals,â€ and occasionally appropriated inconsequential items, but only for good cause: â€œIt was so unjust to be poor.â€

â€œWe made an intellectual fetish out of being outcasts,â€ Athas says of those days and nights â€“ 4 a.m., walking the powder-dust streets of Carrboro, defining myths and articulating the ineffable â€“ the two of them, reading everything, inspired by the outlaw artist/intellectuals, by Paul Green and Richard Wright, right here in Ephesus â€“ shouting in the night.

They were drunk with learning â€“ book learning and real-life â€“ and felt its power.

In a story written this year for the Carrboro Centennial Commemorative (see â€œThe romance of povertyâ€ in last weekâ€™s Citizen, 8/25/11), Athas writes:

One hot night past 2 a.m. in the summer of 1941 when Wayne and I were returning to Wayneâ€™s house from the library, we crossed over the railroad tracks and turned from the paved Carrboro Main Street onto the dirt road that was Weaver Street. In the fork, the wooden post office was dark. The town was fast asleep, not a whine even from flea-ridden dogs dreaming beneath the millhouses. We were conscious of our power. We could do anything.

They played with the shadows of branches, â€œa scrim of shadows magnified and distorted by the streetlights to three times their real size,â€ shapes suggesting arms, motioning to them, pointing the way, but to where they couldnâ€™t know.

â€œIt was magical,â€ she says.

â€˜The frontier is the nowâ€™

And it still is. Athas cavorts in those nights.

The answer isnâ€™t forthcoming: â€œI feel as if Iâ€™ve lived my life in a search for reality.â€

â€œWhere do I live?â€ she asks, then answers, â€œIâ€™m very now-time oriented. But I can make now-time in writing that was 40 years ago.â€

Words can do that, access the past and the future, allowing us to better understand who we are â€“ and who you are. Words are the combination that unlocks empathy.

Empathy: Itâ€™s so much what Athasâ€™s life and work is about. Her concern, though, is that empathy is old-school now, having lost its place in an increasingly virtual world. But sheâ€™s afraid that in saying so, sheâ€™ll be dismissed as a casualty of frumpery, of jaded fuddy-dudditry (my word; her inspiration).

But it would be a serious mistake to discount Athasâ€™s engagement in the world around her. A fall last winter slowed her down somewhat, but her recovery is coming along.

â€œTo me, the frontier is the now. I donâ€™t know this world; itâ€™s a total mystery to me, and itâ€™s totally fascinating. I love it.â€

She worries with where weâ€™ve arrived: â€œI donâ€™t think you can have a proper country with so few people at the top having so much money. How can it be possible to have a democracy that works like that?

In the everyday, â€œI look at people; I talk with people. Theyâ€™re nice.

â€œAnd everything is an adventure. Everything. Just going to the Harris Teeter. Someone saying, â€˜Do you need help?â€™ I donâ€™t need help; Iâ€™m just out of synch, speed-wise.â€

But not otherwise. Perhaps the most remarkable thing about conversation with Daphne Athas is the curiosity with which she infuses it. â€œWhat do you think?â€ â€œDonâ€™t you agree?â€ She really wants to know. Is it a curiosity born of empathy, or the other way around? Regardless, curiosity is encoded in her words and shapes her world, a world that remains a mystery.

â€œI had so many stories told to me in my youth that I had millions of possibilities, millions of options. And then there was a whole library to get more myths, to find out what was true or what wasnâ€™t true.

â€œWhat is true? I think itâ€™s awfully relative.â€ Itâ€™s a little of that hokery-pokery.