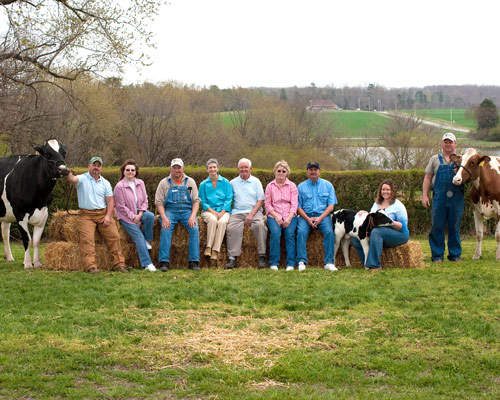 By Rose Laudicina
Staff Writer
They keep our bones strong and healthy with their delicious glass-bottled milk, they satisfy our sweet tooth year-round with their ice cream and they have provided the community with a center to learn the art of agriculture.

They are the Nutter family of Maple View Farm, and they are the 2011 recipients of the North Carolina Grange Farm of the Year award.

â€œWe are humbled,â€ Chris Nutter said of the award. â€œWe work hard, just like every other farm.â€

Nominated by Schley Grange Hall, the local chapter of the national Grange organization, which promotes agriculture and the conservation of natural resources and the environment, Maple View founders Bob and Chris Nutter are being recognized for much more then their dairy delights.

â€œIt wasnâ€™t just because of one thing we did,â€ Bob Nutter said, of why he believes his farm won the award. â€œIt was a combination of everything we do, from the milking to the ice cream to the agricultural center.â€

In its nomination to the North Carolina Grange, Schley Grange Hall wrote, â€œWithout a doubt, the Nutters are the most deserving statewide Grange farm family of the year. We can not think of another farm family more deserving, or with a better life-long resume of accomplishments in their neighborhood and community.â€

The Nuttersâ€™ long list of accomplishments doesnâ€™t just revolve around agriculture; the family has given back in a variety of ways, from setting up a perpetual trust fund in 2001 for the donation of books to elementary school students to establishing a program in 2004 that gives each third-grader in northern Orange County a personal dictionary.

Bob and Chris Nutter, along with their children and calves, moved to Orange County from Maine in 1963 and purchased 475 acres of farmland now known as Maple View Farm.

From the beginning, the Nutters demonstrated their commitment to preserving the rural character of their environment. In 1995, the family donated 107 acres of their farmland to the Triangle Land Conservancy, then another 80 acres in 2005.

Healthy choices, ice cream and education
In 1996, Maple View took control of its product and started pasteurizing and bottling its milk in glass bottles, selling it out of a refrigerator located on the farm. The milk was sold on the honor system: Customers drove up, deposited their money in a jar and took however many bottles they paid for.

Eventually, the operation outgrew two refrigerated containers on the farm and the Nutters began selling their milk in local grocery stores, which allowed their consumer and fan base to grow.

â€œWe figured out a way to stay in business, which was to process our own milk and eliminate the middle men,â€ Chris said. â€œFrom there, an offshoot was that so many people in Chapel Hill drink skim milk that we had a lot of cream left over.â€

Because of the healthy milk choices of the masses in Chapel Hill, in 2001 Bob and his daughter Muffin Nutter Brosig, who passed away in 2010 from cancer, used the leftover cream to create Maple View Ice Cream, becoming the first dairy farm in North Carolina to manufacture its own ice cream.

After the success of the ice cream store and the milk business, the Nutters targeted the need for more educational opportunities regarding agriculture.

â€œWe used to do farm tours up at the farm, but then we had to shut it down,â€ Chris said, citing as the reason the mad cow disease scare. â€œThe need for educating the kids was still there, and is still here, so we built the agricultural center.â€

The Maple View Agricultural Center, which opened in April 2009, is a display of just how much the Nutters have given to the community.

The nonprofit facility has an educational garden, a place to interact with farm animals, classrooms where students can learn about agriculture and science and more than two acres of solar panels that produce electricity, which is then given back to the Duke Energy power grid.

Bob Nutter, now semi-retired, has said the agricultural center and the solar panels were most likely his last major project.

But looking back on all Maple View has done, it seems clear the Nutters could have stopped years ago and still have had a legacy worthy of the Grange Farm of the Year award.

â€œI am 83 years old. I pretty much think I have done our last project,â€ Bob Nutter said.

These days, Bob Nutter leads tours at the agricultural center and Chris Nutter keeps the farmâ€™s books, while management of the farm has been taken over by Mike Strowd, co-owner of Maple View Farm Inc.

When asked why they continue to give back to the community, the Nutters said that itâ€™s because of the local community that Maple View is still in business.

â€œThe community has been very good to us,â€ Chris Nutter said. â€œIt is just part of what you do.â€