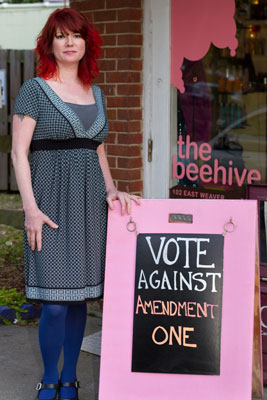 Much has made of the moral and religious reasons to be for or against Amendment One, the constitutional change that would make marriage between a man and a woman the only domestic union legally recognized by the state.

That hue and cry often drowns out another important consideration: the impact on business growth and economic development. Many observers fear passage of Amendment One will create negative ripples extending from the ballot box to the boardrooms and back offices of businesses large and small all over The Old North State, and local chambers of commerce have joined many business owners, scholars and government officials in decrying the proposal. The Chapel Hill-Carrboro Chamber was the first in the state to publicly oppose the amendment; Durhamâ€™s chamber followed suit.

One factor driving business opposition is the significant consequences the amendment has for employersâ€™ abilities to provide benefits like health insurance to same- and opposite-sex domestic partners and their children.

As written, Amendment One includes a provision covering â€œprivate contractsâ€ such as employment agreements. But most North Carolina workers are â€œat-willâ€ employees with no formal contracts. That means that unless a specific law or employment contract protects employees, an employer can â€œtreat its employees as it sees fit,â€ according to the State Department of Laborâ€™s website. Employees in those situations are not covered under the private contracts provision of the amendment.

A 2005 study from Hewitt Associates noted that the number-one reason for offering benefits to same- and opposite-sex domestic partners is employee recruitment and retention. That means the amendment could also hurt employersâ€™ abilities to attract and keep the best and brightest talent.

â€œThe last thing you want to do is to put a barrier in the hiring process thatâ€™s not related to someoneâ€™s ability to do the job,â€ notes Joel Sutherland, partner/developer at New Media Campaigns in Carrboro. â€œAmendment Oneâ€™s going to have an impact.â€

Itâ€™s also a problem for large employers. Eighty-nine percent of Fortune 500 companies prohibit discrimination based on sexual orientation. Among them are homegrown corporations like BB&T, Bank of America, Duke Energy and Loweâ€™s. Itâ€™s unclear if Amendment One would put these employers â€“ or their peers relocating here â€“ in violation of their own corporate policies.

Which brings us to a related concern: lawsuits. Beyond legal challenges to the amendment itself, many legal experts believe its broad language will open employers to potential legal action by employees. Thatâ€™s a turn-off to businesses looking to relocate or expand to North Carolina.

â€œPassage of Amendment One would introduce uncertainly, controversy and unknowns that are not currently present [for] prospective businesses considering North Carolina as a location for operations,â€ warns Steve Brantley, director of Orange County Economic Development. â€œSome firms could forecast such a significant and worrisome impact to their employee-recruitment effort that they might elect to move elsewhere, and not have the added challenges imposed by Amendment One.â€

Others, like entrepreneurship expert Monica Doss, worry that the amendment would stifle the economic recovery by hurting entrepreneurial development.

â€œWeâ€™ve worked hard over the past three decades to emphasize North Carolinaâ€™s strengths as a forward-thinking community that values creativity, intellectual prowess and diversity,â€ says Doss, former leader of the Council for Entrepreneurial Development and now a principal with Entrepreneurial Collaborations. â€œNorth Carolina has prospered from its ability to attract the best and the brightest. That’s the foundation of our entrepreneurial success. Sending the message that the state is constitutionally opposed to any group of people will have a chilling effect. We will take a giant step backwards if Amendment One is passed.â€

â€œWe are attempting to market the Triangle as a not only a great place to start a business but as a great place to live,â€ he says. â€œIf Amendment One passes, it would be interpreted by some as a negative sign about living in North Carolina. In this way, the passage of Amendment One could make it more difficult for us to recruit entrepreneurs to the area.â€

Tar Heel entrepreneurs also could find it hard to recruit talent and financing.

â€œCalifornia dominates the venture-backed job market. If we aim to pull tech talent to RTP â€“ talent that tends to be young, hip and gay-friendly â€“ itâ€™ll be tough if we are perceived as a backwater,â€ says Patrick Vernon, clinical assistant professor of entrepreneurship at UNCâ€™s Kenan-Flagler Business School. â€œSimilarly, venture capitalists may write off North Carolina as undesirable and/or lacking an innovative spirit â€“ quelling the creative class.â€

North Carolina is the last Southern state without a marriage amendment, something Brantley says gives it an edge in the marketplace.

â€œOne of this stateâ€™s leading advantages in this very competitive, multi-state approach to economic development is the well-established view that North Carolina is usually more progressive and visionary,â€ says Brantley, who worked more than 20 years for the state Department of Commerce. â€œCompared to other states, and especially here in the South, North Carolina generally takes the lead on issues benefiting all of its citizens. North Carolina set the example, while our neighboring Southern states watched and eventually tried to copy.

â€œPassage of Amendment One would dilute the progressive nature of our stateâ€™s character and its direction, and therefore risk eliminating one of our strongest and most appealing business advantages.â€

Moral issues aside, many business owners say Amendment One is bad for business because it violates both the profit and the people elements of the bottom line.

â€œIf this passes, it may dissuade people from moving to North Carolina and becoming future clients,â€ notes entrepreneur Diane Koistinen, owner/stylist at The Beehive in Carrboro. â€œI would think twice about moving to a state where they are taking away rights. I would think twice about moving somewhere that endorses discrimination. If people donâ€™t move here â€“ or if they move away â€“ because North Carolina discriminates against certain people, you have fewer people to buy your products or use your services.â€

Adds Adam Abram, CEO of James River Group in Raleigh: â€œWeâ€™re in a worldwide competition in which we want to have as many talented people in our state as is possible. I want to make the most hospitable, safe and welcoming environment here for everybody whoâ€™s able and interested in contributing to the stateâ€™s well-being. Making a constitutional amendment and carving in stone a â€˜not welcome hereâ€™ sign is contrary to the ethic of our state.

â€œDonâ€™t tell talented people to go away. Amendment Oneâ€™s not right. Itâ€™s not moral. Itâ€™s not us at our best.â€

Margot Lester is chair of the Chapel Hill-Carrboro Chamber of Commerce economic development and public policy committee and supports its opposition to Amendment One.