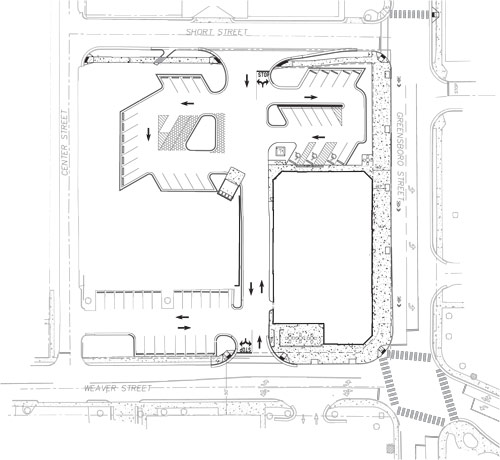 CARRBORO â€“Â After postponing a public hearing scheduled for April, developers of a CVS project proposed for the corner of North Greensboro and Weaver streets have returned with three revised plans, all of which scale back the proposal from Center Street.


CVS Caremark earlier this year filed for a conditional-use permit and a rezoning to allow it to build a two-story, 24,000-square-foot building with a 24-hour CVS on the ground floor, office and storage space above it and a parking lot on land occupied by the former WCOM building, two homes on Center Street and the offices of dentist Debra Seaton.

Following neighborhood feedback and comments from the Carrboro Planning Board that the current mix of residential and commercial zonings on the parcels is appropriate considering the residential properties on the west side of Center Street, developers asked to postpone a public hearing on the previously proposed plans.

Two of the three new plans would avoid redeveloping 104 Center St. altogether, while the other would scale back parking previously proposed for 104 and 106 Center St. and add a small park along Center Street. The footprint of the proposed building remains the same in the new plans, but several architectural changes have been made, including the addition of awnings, balconies and an atrium-style entrance on the corner of North Greensboro and Weaver.


In addition, each of the three plans reduces the amount of parking from the previously proposed 64 spaces to between 47 and 61 spaces.

â€œThese are our last three options. â€¦ Weâ€™re going to go with one. I donâ€™t know which one thatâ€™s going to be yet,â€ said development representative Leigh Polzella, adding that they would not revert back to the previous plan.

â€œI think that the very-much consensus is pulling off of Center Street as much as possible,â€ she continued.

CVSâ€™ plans to develop the property have drawn fire from nearby residents, who say the development is not appropriate for the space and would increase traffic on an already burdened area.


Some residents said they preferred the new plans to the previous plan, but were still critical of the project overall.

â€œMy feedback would be that these plans are better than the ones you submitted before,â€ said Peter deLeeuw, one of the owners of the 102 Center St. property who refused to sell their property to CVS. â€œBut I think youâ€™re still trying to fit something where it doesnâ€™t fit, next to this residential neighborhood. Itâ€™s still 24 hours; itâ€™s still going to generate traffic and noise and light.â€

Residents also questioned what would happen with the house on Center Street that CVS already owns if developers pursue one of the options that would not use the Center Street properties.

â€œWhat kind of guarantees do we have that later on CVS wonâ€™t want to make a bigger parking lot?â€ Center Street resident Jeff Herrick asked.

Polzella said she was not sure what would happen to the property, but that the house would not be rented out since CVS isnâ€™t in the leasing business, adding that later expanding the parking lot would require a rezoning â€“ something developers would hope to avoid with a plan that didnâ€™t develop the Center Street properties.

Town development-review administrator Marty Roupe said it was not yet clear what type of rezoning the new plans would require.

Polzella said she did not know when they would submit a plan to the town, but that they would likely be talking with town staff within the next few weeks.