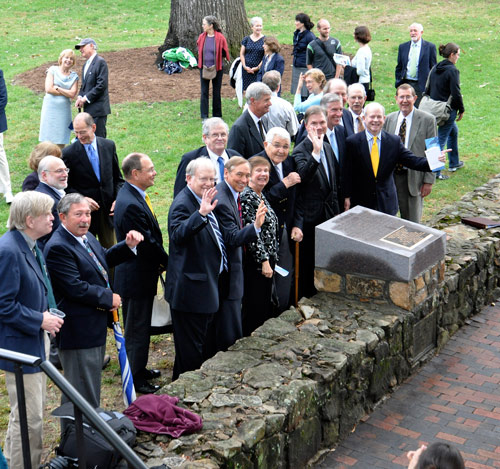 By Taylor Sisk
Staff Writer
Check out the 1966 Yackety Yack and see if you can identify the progressives. Sure, the occasional beard is a dead giveaway: Gary Waller, vice chair of the UNC chapter of Students for a Democratic Society (SDS), has one.

Yes, Waller was further out there, almost certainly more politically sophisticated than Powell at the time. In February 1966, Waller described SDSâ€™ membership (which numbered perhaps 25 to 30) to a Daily Tar Heel reporter as being â€œmoderate liberals to radicals,â€ and that by radical he meant â€œgoing to the roots of issues.â€

Though you sure wouldnâ€™t sense it from a perusal of the â€™66 Yack, long hair and looser mores were just barely around the bend â€“ and dramatic social change was already very much afoot. That year, Waller and Powell were among a group of student leaders who challenged the Speaker Ban Law, an infringement of free speech on campus.

Yesterday, in a ceremony presided over by UNC Chancellor Holden Thorp, a memorial marker was placed on the stone wall that separates McCorkle Place on campus from Franklin Street, where the ban was openly challenged in March â€™66.

The names of 12 students who brought a lawsuit that overturned the law are inscribed on the marker, along with the words of then-Student Body President Paul Dickson III: â€œI sincerely hope history will record that the student body did not shy timidly away from this challenge, but firmly and responsibly met it head on.â€

â€œWeâ€™re very careful about what we put on McCorkle Place because itâ€™s the physical heart of Carolina,â€ Thorp said last week. â€œIn this case, it was an easy decision. This marker commemorates events that helped define our university on the spot where it all happened.â€

That it happened at all was something of a shock at the time. Jesse Helms, the UNC Board of Trustees and most of the folks back home said those involved should just get on back to class.

But there was far too much to learn, to challenge, to be bound by the structures of a classroom. The civil rights movement was escalating, as was the war in Asia â€“ Dickson had himself come to UNC after a tour in Vietnam.

Powell had grown up in Thomasville, attended a small public high school and came to Carolina on a Morehead scholarship. He describes himself as a â€œconservative kidâ€ upon his arrival, an embodiment of his parentsâ€™ values.

â€œBut there was a growing awareness that things were not working,â€ he says, â€œand that our leaders were letting us down.â€

â€œWhat started to change things was the war and the civil rights movement,â€ Powell says. â€œI was especially focused on the insanity of the war in Vietnam. Intellectually, it just didnâ€™t make any sense to us.â€

The world was intruding on the Southern Part of Heaven, and a cohort of students was digging at the roots.

The Speaker Ban, passed in a big hurry by the North Carolina Legislature in 1963, prohibited from speaking on UNC campuses anyone who was a member of the Communist Party, advocated for the overthrow of the government or had invoked the Fifth Amendment in response to questions about subversive activities.

In March 1966, in defiance of the law, the campus SDS chapter invited Frank Wilkinson, a vocal opponent of the House Un-American Activities Committee, and Herbert Aptheker, head of the American Institute of Marxist Studies, to speak from the Franklin Street sidewalk, just beyond the McCorkle Place wall, while students â€“ some 1,200 for Wilkinson on March 2, perhaps 3,000 for Aptheker on the 9th â€“ listened from the campus lawn. It was theater of the absurd, a mockery of the barrier the law sought to impose. (Both Wilkinson and Aptheker spoke at Duke the same week.)

Aptheker termed it a â€œnew kind of low â€¦ in repression.â€

Student government and other more traditional-minded campus organizations had joined SDS in inviting Wilkinson and Aptheker, but had made it clear they werenâ€™t embracing the messengers, simply the right for students to hear what they had to share.

â€œI think my brother was pretty mainstream, politicallyâ€ says Robert Dickson, Paulâ€™s younger brother and publisher of The Carrboro Citizen. â€œI think that he understood the basic free-speech issue that was at hand.â€

â€œHeâ€™d argue with a post,â€ Dickson says, and had the drive to back it up. â€œHe felt that the best way to fight communism was to understand it; that was his argument.â€

William Friday, president of the university system at the time, worked quietly behind the scenes with Dickson to overturn the law â€“ quite literally, in fact, behind the scenes, with the men sometimes conferring within the wall that obscures the presidentâ€™s resident from campus.

Friday holds great respect for Dicksonâ€™s leadership in the face of critical challenge: â€œHe had great tolerance, but was very determined.â€

â€œWhat Paul and his colleagues did was redirect and redefine the direction of the university to be what a university should be,â€ Friday says.

â€œA university has got to stand for free speech and freedom of thought before all else.â€

There were risks involved â€“ to careers, of being perceived as rabble-rousers and malcontents, commies even.

Jesse Helms was in full throat at the time as commentator for WRAL-TV in Raleigh. In a Feb. 10, 1966, editorial he submitted that it was time for university officials to â€œclamp down and insist upon discipline and for the rest of us to remember that cautious laughter is the best medicine for a noisy bunch of troublemakers who are about to be consumed by their own self-importance. â€¦

â€œAs for the leaders of this â€œpipsqueak rebellion, they hardly merit any respectful attention at all.â€ SDS leadership, Helms observed, should â€œskip a protest meeting in favor of a trip to the barbershop.â€

Jerry Carr was an SDS member and, like Waller, a sociology graduate student with experience in the civil rights movement. Their view was that the Speaker Ban Law had been passed as a reaction against the civil rights movement, which many legislators believed was orchestrated by communists. The UNC campus was rife with communism â€“ so Helms and our legislators believed.

â€œThe animus toward UNC unified those of us on campus, including the faculty,â€ Powell says. The behavior of state legislators and the UNC board of trustees, who were tasked by the legislature to enforce the speaker ban, was, Powell says, an affront to â€œthe legacy of Frank Porter Graham.â€

MacNeill Smith, a Greensboro lawyer, agreed to argue the studentsâ€™ case against the Speaker Ban Law â€“ but not before sending out a request for assistance to 50 lawyers, each a UNC grad. None accepted the challenge.

Paul Dickson was killed in an automobile accident in 1972.

â€œThat experience helped me redefine what it means to be a citizen,â€ Powell says. If you sense somethingâ€™s wrong, â€œyouâ€™ve got to put your shoulder to the wheel and change it.â€

â€œOut of that experience, you see, a whole generation of people learned the importance of freedom here,â€ Friday told a documentary filmmaker a few years back, â€œbecause thereâ€™s never been a more humiliating experience for this university, in my opinion,â€ than having Wilkinson and Aptheker speaking to students from a Franklin Street sidewalk.

â€œCommemorating this event serves to remind the university community that the very existence of public higher education, which began with UNC, is part of the same democratic thought that gave us free speech and the rest of the Bill of Rights,â€ Thorp says. â€œItâ€™s also a reminder that we must be vigilant in protecting those rights.â€

A coalition of SDS and student government and other mainstream campus organizations â€“ including the Campus Y and the Daily Tar Heel â€“ may have made for, in moments, uncomfortable bedfellows, but all involved saw clearly the utility of the association.

â€œI think it took a mainstream guy like my brother to get this done and maybe it took SDS to get the mainstream to do what was right,â€ Robert Dickson says.

Powell calls SDS a valuable ally at a critical juncture.

â€œTo paraphrase Paul Dickson,â€ Carr says, â€œperhaps history will record that this generation did not shy away from its responsibility, but, firmly and responsibly, met it head on.â€