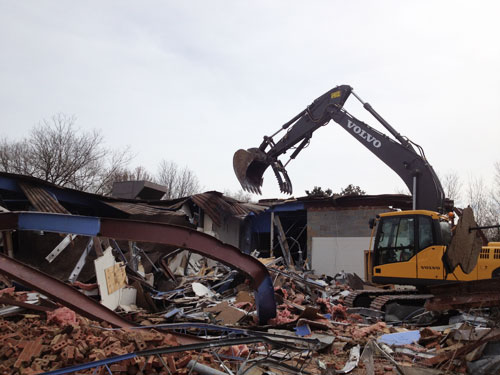 300 East Mainâ€™s developers, Main Street Properties, will celebrate the official groundbreaking of the project during a ceremony on March 28. The project includes the redevelopment of properties extending from the intersection of Main and Boyd streets near Nice Price Books to the present municipal parking lot on the corner of Main and Roberson streets.

The first phase of the project includes a 142-room Hampton Inn and Suites and a 500-space, six-level parking deck. The hotel building will include 18,100 square feet of retail/restaurant space on the ground floor, room for six to nine tenants.

Laura Van Sant, one of the Main Street Properties partners, said she expects the building to house three or four food- and beverage-related businesses, with the rest likely to be retail shops.

Additional phases of the project will include a five-story retail and office space near the train tracks and redevelopment of the building that houses Catâ€™s Cradle, Fleet Feet and Amante Gourmet Pizza.

Demolition work began on Friday, and by Tuesday appeared to be nearly complete.

By contrast, the financing of the project was anything but fast, with a number of delays and roadblocks over the past few years as the economy declined.

â€œIt just took longer to get all the details of the financing worked out,â€ Van Sant said. â€œItâ€™s still very challenging, even though the economyâ€™s coming back.â€

Van Sant said she viewed being able to obtain financing for the hotel and parking deck as a sign of confidence in the project, given that hotels and parking decks are typically particularly difficult to finance.

â€œWeâ€™re thrilled to be under way,â€ she said.

Developers estimate construction of the first phase to take about 14 months.

According to a press release from Main Street Properties, both The ArtsCenter and Catâ€™s Cradle plan to remain part of the property and are working on expansion plans. Other existing tenants that plan to remain include Amante, Ba Da Wings, Fleet Feet, TJâ€™s Beverage and Tobacco and WCOM.