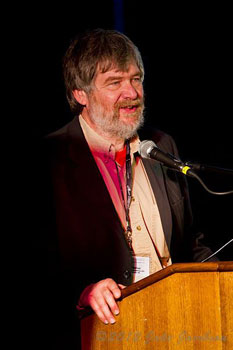 The ArtsCenter has chosen Art Menius as its new executive director, board of directors chair Betsy James announced on Monday.

Menius will take over next week.

â€œThanks go to the Search Committee, to Interim Executive Director Jay Miller, our faithful volunteers, to the staff and to the Board for keeping us moving in the right direction up until this point,â€ James said in a press release.

Menius will be returning home to the Triangle, having left in 2004. Heâ€™s a Raleigh native and received bachelorâ€™s and masterâ€™s of arts degrees in history from UNC.

He calls The ArtsCenter â€œdear to my heartâ€ and said that even in his absence he considered Carrboro, Chapel Hill and north Chatham to be home.

His history with The ArtsCenter, he said, â€œis deep and provides some of my best memories.â€

In 1983, Menius began writing about roots music for area publications, including the News & Observer and the Independent.

â€œArtsCenter founder Jacques Menache had just started presenting live music when I started writing about music for the News & Observer and its Chapel Hill-Carrboro section as a freelancer almost 30 years ago,â€ he said. â€œI have no idea how many events at The ArtsCenter I covered over 21 years for the Independent and the News & Observer.â€

From 2007 till 2010, he was director of Appalshop, the Appalachian media and arts center in Whitesburg, Ky.

â€œThis is a wonderful time to be returning,â€ Menius said, praising ArtsCenter staff and board members and Miller for turning the organizationâ€™s financial situation around.

â€œI have the privilege of coming in on a rising tide. Over the next few years The ArtsCenter will move forward in collaboration with the town and the Carrboro community.â€
Menius said one of his primary objectives in his first few weeks on the job will be to better get to know board and staff members and stakeholders in the community.

Miller will stay on in an unofficial capacity to assist with the transition.

â€œHeâ€™s a good fit for a lot of reasons,â€ Miller said of Menius, citing his long association with arts organizations, including experience with marketing and sponsorships.

â€œJust as important, he has experience with nonprofits, with grant writing and fundraising and those sorts of things.â€