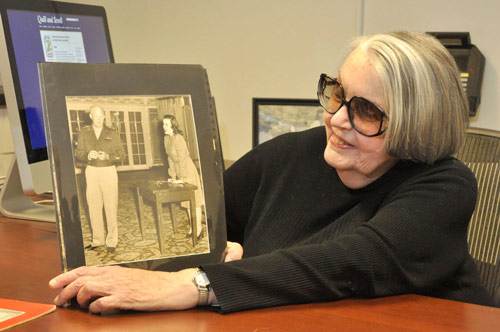 Getting to meet and interview the luminaries of our times is one of the perks of being a journalist. Val Lauder should know; during her long tenure at the Chicago Daily News, the retired UNC journalism professor interviewed the likes of Frank Sinatra and General Dwight Eisenhower (seen here during a 1947 event). Itâ€™s all recorded in a new book, The Back Page, released this summer by Amazon.com. Val describes the book as â€œmy experiences â€“ adventures â€“Â at a greatÂ American newspaper. This is not an academic kind of account of journalism at an earlier time. Thereâ€™s a lot of humor in the pages, smiles, chuckles, laughter.â€ She describes the bookâ€™s genesis: â€œA couple of summers ago I was not scheduled to teach Summer School, and the idea sort of â€¦ came to me of writing about my experiences at the Chicago Daily News, the historicalÂ figures I met, and the celebrities â€¦ [during] a century of great events. â€¦ I was aware as I wrote that I was sharing with readers another time.Â We had typewriters.Â Telephones … some of them the old-fashioned, upright telephones sometimes called â€˜candlestickâ€™ telephones.Â Glue pots on the desks. â€¦ It was only when Tom Bowers [retired UNC J-School senior associate dean] read the manuscript and emailed me about it â€¦ that I realized I had documented a time that has been lost, that the people who [now] work in cubicles with computers and carry cell phones â€¦ have no awareness of that time or how we reacted to breaking news stories.â€ As Steve Reiss, enterprise editor of The Washington Post, put it in his comment on the back of the book: â€œAnd best of all, it captures why anyone would work in these dirty, loud rooms with a deadline always hanging over your head: because itâ€™s so much damn fun.â€ The book is available at Amazon.com