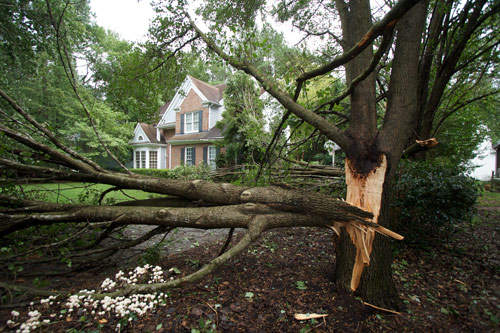 
A strong storm swept through Orange County on Tuesday afternoon, downing trees and knocking out power for more than 15,000 homes across the county.

The storm, which occurred around 3:30 p.m., only lasted a few minutes but left debris all over downtown Carrboro. Fallen trees blocked roadways, including North Greensboro Street and Pittsboro Street in Chapel Hill, which was still closed to traffic as of Wednesday. Some Chapel Hill Transit bus routes were still detoured and delayed due to the damage on Wednesday as well.

Carrboro Deputy Fire Chief Richard Cox said his department responded to calls related to downed trees and power lines following the storm and throughout the night. The fire department set up an emergency communications center to deal with the magnitude of calls coming in to 911, he added.

â€œWe had so many calls throughout the county that the communications center was overwhelmed,â€ he said.

â€œWe actually didnâ€™t have any injuries as a result of the storm,â€ he said.

Carrboro Public Works Director George Seiz said most of the damage seemed to occur around downtown Carrboro and south of town, and that the northern edge of Carrboro seemed to have been largely spared.

â€œWeâ€™re asking folks who have debris from the storm to assist with the pickup â€“ to cut limbs into sections of four feet or less,â€ he said, adding that limbs larger than four inches in diameter should be cut into two-foot sections.

Debris material should be placed at the curb, not blocking sidewalks or bike lanes and away from fire hydrants and mailboxes. Seiz said a pickup schedule has not yet been determined.

â€œItâ€™ll probably sit for a while cause thereâ€™s going to be a lot of it,â€ he said.