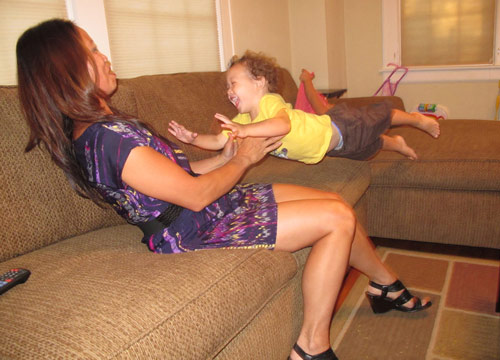 Who says man canâ€™t fly? Well, maybe not man, but certainly man-child! His name is Moxy Quan Appelbaum, and according to his mom, Mai Nguyen, seen here serving as catcher and landing craft for her 2-and-a-half-year-old, â€œHe has always been a flying monkey â€“ walking at 8 months, balancing on his rocking horse on one foot at 12 months and then jumping at every opportunity thereafter â€“ on beds, couches, restaurant chairs, rocks, etc. He was even a kicker in the womb!â€ When I asked jokingly in an email what happens when Moxy turns 14 and still wants fly to mama, Dad Greg Appelbaum, an assistant professor in psychiatry at Duke, responded: â€œNotice Mai didnâ€™t answer â€¦ thatâ€™s because we donâ€™t know â€¦ maybe we can expect him to be a star high school athlete. On the other hand he may jump off the wrong rock or restaurant chair and spend 14 in a cast.â€ My bet is that Moxy joins the circus and becomes a trapeze artist. (Photo back-story: I met Mai, an assistant professor in the UNC Department of City and Regional Planning, four years ago when we were in the inaugural class of Faculty Engaged Scholars at the UNC Center for Public Service. The photo came from a retirement party Mai and Greg threw for Gregâ€™s dad, Mark, at their home in Durham earlier this summer. Which just goes to prove once again: Donâ€™t go anywhere without your camera!)

Round three on the Hollyhock Lady: Mrs. Sallie Bush was NOT the mama of the late Chapel Hill Police Chief William D. Blake, according to the associate curator of the North Carolina Collection at UNCâ€™s Wilson Library, Eileen McGrath, who went back in the musty dusty files to find out that Blakeâ€™s mother was the late Emma Mock Blake of Carrboro. Eileen writes, â€œMrs. Bush appears to be the widow of Grover C. Bush, who lived at [139 E. Rosemary St.] since the early 1950s.â€ Well done, Eileen!