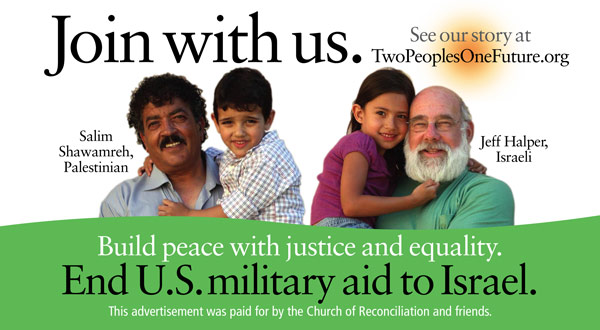 
A little more than a week after their removal, a group of controversial ads is back up on Chapel Hill Transit buses.

The ads, placed by the Church of Reconciliation, were part of the â€œJoin With Usâ€ and â€œBe on our Sideâ€ national ad campaign coordinated by the U.S. Campaign to End the Israeli Occupation, calling for the end of U.S. military aid to Israel. Five complaints led to a review of the ads, which found that they were not in compliance with CHTâ€™s policy on political and religious advertising, which requires a disclaimer stating the purchaser of the ad as well as contact information.

Additional residents have contacted the town regarding the ads since the initial review, and the controversy has launched a discussion among bus riders, other residents and Chapel Hill Town Council members.

â€œI was terribly disappointed to learn that a local church thought it was appropriate to buy space on our free public transit system that would alienate members of the Jewish community like me,â€ wrote Lew Borman, former executive director of the Durham-Chapel Hill Jewish Federation, in an email to the council. â€œThese ads, however well meaning, are insulting. It is a sad unilateral expression.â€

Though the churchâ€™s ads had been approved by CHT staff and the town attorney, they did not include the churchâ€™s contact information â€“ only that the ads had been â€œpaid for by the Church of Reconciliation and Friends,â€ said Pastor Mark Davidson. The omission was unintentional, he said, and theyâ€™ve since added the contact information and gotten the ads back up.

â€œWe wanted to generate discussion and dialogue, and especially to draw some attention to the issue, and it certainly has done that,â€ Davidson said.
Davidson said the church spent about $1,400 printing the ads and less than $1,000 to run them on the 98 CHT buses for one year.

CHT director Steve Spade said the policy on bus advertising was approved by the council in June 2011 when CHT began to sell advertising on its buses.

â€œFrom time to time, somebody will call and have a complaint about something,â€ he said, noting that theyâ€™d received a few complaints regarding the Wells Fargo bus wrap.

As for the churchâ€™s ads, Spade said, â€œAs far as weâ€™re concerned, theyâ€™re in complete compliance with the policy.â€

Council members have indicated that they would like to revisit the transit advertising policy in light of the controversy.

â€œFirst Amendment rights were a significant part of our discussion [about the policy], and how to balance that right with our interest in maintaining a positive/neutral ambiance on and about our buses and transit system,â€ council member Jim Ward wrote in an email with regard to the first complaint. â€œIâ€™m not surprised by the concern expressed by one of our bus riders. While we created a very thoughtful set of protocols, sooner or later, someone was bound to voice their concern.â€

â€œBeing the only Jewish person on the council I can tell you that Israel is a very emotional, complicated issue to discuss,â€ Rich wrote in an email. â€œI publicly do not take a stand on Israel, however, I do think we as a town have to understand the strong bond Jewish people have with Israel, therefore we need to extend our respect by not accepting political ads that will offend our Jewish citizens.â€

Davidson said the church has received a flurry of contact about the ads and that their next step will be to hold some discussions or forums.

â€œI think we have known all along that the purpose of the ads was to be a catalyst for conversation,â€ he said. â€œTheyâ€™ve done that, and we want for them to continue doing that.â€

â€œWhat we really care about is the issue of the occupation and the horrendous conditions that Palestinians live under,â€ he continued. â€œI just donâ€™t want the main reason for our effort to get lost in all of these other controversies.â€