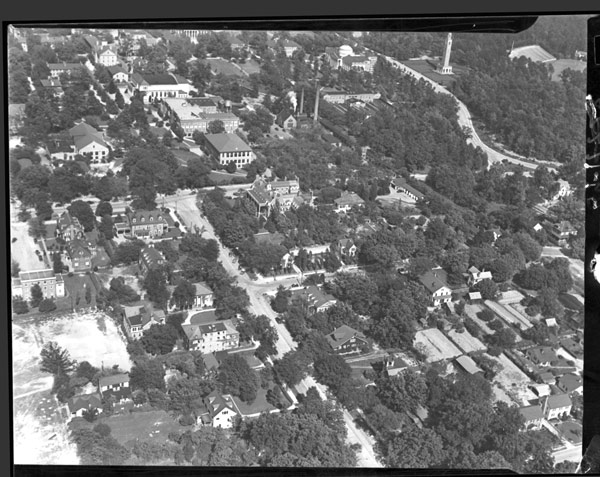 Chapel Hillâ€™s pioneering woman photographer, Bayard Wootten, took to the air to make this stunning birdâ€™s-eye view of the campus in 1939. Brought to my attention by 88-year-old William Huskey of McCauley Street, the photograph is the cover shot from a delightful little photo pamphlet titled â€œWays and Byways of Chapel Hill,â€ featuring 16 of Woottenâ€™s â€œslices of lifeâ€ photographs around the communities. Of this aerial photograph, I canâ€™t help imagining the redoubtable Wootten leaning out of an open cockpit biplane as it zoomed low and banked at a precipitous angle so she could get this shot of the campus â€” probably using some form of the classic two-fisted Speed Graphic 4×5 press camera. To orient yourself: thatâ€™s Cameron Ave. running diagonally top to bottom and the Carolina Inn roughly in the center of the photograph. Notice also the smokestacks of the old power plant behind present-day Phillips Hall. Thanks to Mr. Huskey (and the good folks at Wilson Libraryâ€™s N.C. Collection), weâ€™ll be featuring more of Woottenâ€™s work this fall. What a woman. What a photographer!