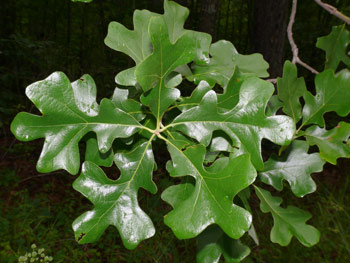 Editorâ€™s Note: The following is a guest Flora column by Alan Weakley, director and curator of the UNC Herbarium.

It is hard for us not to see time through the lens of our species; humans have life spans measured in decades, at most about a century. Most other organisms with which we form close relationships have life spans shorter than we do. We have pets that live a decade or two. We plant a garden, which dies in the fall and is replanted in the spring. Perhaps we have a psychological vanity that we are nearly immortal, presiding godlike over our dependent animals and plants, watching their beginnings and ends.

However, we live our lives around organisms that live much longer than we do, that may be almost unchanged from the time of our birth to the time of our death, that stolidly oversaw events that we might consider impossibly long ago (a band of Native Americans moving along a trading path, the American Revolution, the founding of the University of North Carolina, the marriage of our great-great-great grandparents, the Civil War) and may see the 24th century. Most trees have life spans of centuries, often many centuries, and while in the eastern Piedmont we lack the â€œMethusaleh treesâ€ (bald-cypresses, redwoods, sequoias, bristlecone pines) with lifespans of millenia, we still live among trees that far outlast us.

Undoubtedly the most famous of old trees in Carrboro-Chapel Hill is the Davie Poplar, already a notable tree in 1792 and considered to be at least 300 years old. Carolina grad though I am (â€™78), I canâ€™t say that the Davie is one of my favorite old trees around town, nor is it likely the oldest. Size is a misleading indicator of age, and tulip trees (Liriodendron tulipifera) like the Davie are fast-growing, light- and soft-wooded trees â€“ they bulk up fast, especially if pampered by ground crews and fed a rich diet of nutrients and groundwater!

Instead, consider our post oaks (Quercus stellata) common trees of the high, dry, granite monadnock of Chapel Hill. Sometimes called â€œiron oak,â€ this species is a survivor, tolerant of drought and fire and nutrient starvation. It grows slowly, often adding less than 1/16 of an inch of diameter in a year, especially when growing on a dry granite hilltop in acidic soils. Growing as little as half an inch a decade and six inches a century, post oaks develop wood that is hard and tough, the heaviest wood in North America.

As you walk or bike around town (downtown in Carrboro near Weaver Street Market, around the UNC Campus), ponder the age and characterful individuality of the many big old post oaks, with medium-gray bark, characteristic cross-shaped leaves and gnarled spreading limbs. They have withstood drought, lightning strikes and the fires set by lightning and Native Americans. Some of them approach three feet in diameter and are as old or older than the Davie Poplar, mature trees before European settlers came to what is now Orange County. Ponder all that has taken place beneath their spreading branches!