Good morning, Carrboro.
It’s about 30 degrees out there.
Meanwhile,
â€¢ Big story out of Chapel Hill: Chief Jarvies to retire
â€¢ Jamzetta Bedford elected head of the schoolboard, Pam Hemminger new vice-chair
â€¢ I know this is old news, but I’m still amazed UNC’s getting a 19 percent return on its money
â€¢ PSNC rate change approved. The way this is structured, you’re encouraged to use more gas in the summer.

Also, don’t forget that there’s art all over the place tonight, including openings at Wootini and the ArtsCenter. 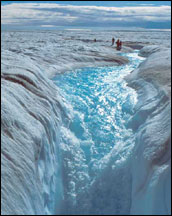 Living in a town full of researchers, I always cringe when I hear the bloviates on the radio talk about junk science. Yep, the world of academia has it’s weird side and anyone trying to make a point can find something that looks like science to back it up. The latest logjam over global warming is an example of how the sharply polarized political climate (pardon the pun) is shaping policy.
In this state, the policy debate over climate change and what to do about it is taking place in the Legislative Commission on Global Climate Change, which meets again on Monday. While there are a number of things the state can do to reduce its greenhouse gas output, the big hurdle for the commission will be getting a buy-in from the business community. Right now, the majority are saying “what’s in it for me?” And they don’t seem to mind that there are pro-business legislators playing the alternative science card.
So, it might be time for the state’s science community to weigh in.
There’s plenty of research being done around here that could help legislators shed a light on things.
Reading through a recent batch of UNC info, I was struck by how much work on global warming is being done in the area.
For instance, the American Geophysical Union meets Monday in San Francisco and a bunch of UNC researchers are headed out there with their latest earth science studies in hand. A glance through the Tip Sheet for the event shows a lot of work on climate change (and some other pretty cool stuff). From the summary:
* Climate change
o Viking trash holds climate change clues
o Greenland ice quakes forecast faster melting
o Solar radiation drives abrupt climate change
* Earth
o Earthquakes speed up eastern California
o How new faults are born
o Super-eruptions don’t need super-sized sources
* Ocean
o Giant waves in Massachusetts Bay
* Restoring rivers and streams
o Natural dams cool hot summer streams
o Sourcing nitrogen contamination in the Northeast
o Shining a light on sunlight to streams

Consider this work in Greenland by Professor Jose Rial:

Climate Variability, Melt-Flow Acceleration, and Ice Quakes at the Western Slope
of the Greenland Ice Sheet
Jose Rial, professor, department of geological sciences
Measurements of seismic activity in Greenland’s ice sheet indicate the activity is related to the ice sheet’s probable fragmentation due to global warming. Project SMOGIS (Seismic Monitoring of Greenland’s Ice Sheet), a collaboration between UNC-Chapel Hill and the University of Colorado at Boulder, has detected intense microearthquake activity throughout the region close to the Jacobshavn glacier, one of the world’s fastest moving glaciers. The seismic activity is clearly related to glacial sliding (at the base of the ice sheet) and crevassing, or large fractures expanding under the increased warming. “The area we are inspecting could be seen as belonging to the buttresses of a giant cathedral, which is the Greenland ice sheet,” Rial said. “If the buttresses fail, the entire cathedral could collapse, perhaps in just a few years. This may be part of what has been called abrupt climate change.”

Cross-posted from Exile on Jones Street.

From the NWS Discussion:

HIGH PRESSURE WILL CONTINUE TO BUILD INTO THE REGION FRIDAY AND FRIDAY NIGHT RESULTING THE COLDEST TEMPERATURES SO FAR THIS SEASON.

And it’s going to get windy as well. It’s already blowing pretty good south of town. 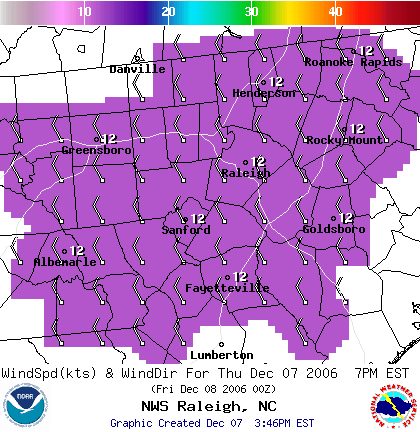 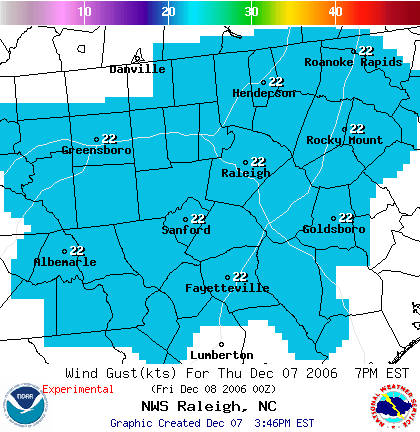 Another art opening on Friday. This one for the Chatham County Artists Guild from 6-8 p.m. at the ArtsCenter. The guild has a big studio tour coming up.

Click the map for a tour of the tour

You might notice an RSS feed on the right column of The Mill that’s pulling in stories from something called the Carrboro Commons. The Commons is the work of once of the most innovative bunch of students I’ve run across in some time. Their professor, Jock Lauterer, is a longtime community journalist who grew up in Chapel Hill. He delivered newspapers for Jim Shumaker at the Chapel Hill Weekly when he was a kid and had the added benefit of a grandfather who was in charge of Wilson Library.

Jock and his students got revved up about the idea of a newspaper for Carrboro and managed in one semester to launch something that I hope will be around for a good long while. The Commons has news and features and photos and, if they want to hear me stop yapping to ’em about it, audio.

Here’s an excerpt from Jock’s letter to Carrboro:

As to the â€œwhat,â€ the Carrboro Commons will be a bi-weekly, interactive â€œe-zineâ€ or Web newspaper, a â€œlab newspaper,â€ if you will, (meaning that this news and information site is an experiential learning project and an integral part of the required classwork for JOMC 459 Community Journalism.) What you are looking at today is our prototype edition â€” the result of a flash of inspiration in class earlier this fall, days of brainstorming, many sleepless nights, more of what the Buddhists call â€œauspicious coincidences,â€ and a nearly vertical learning curve for all of us â€” plus a lot just plain old-fashioned journalism shoe-leather.

Here’s a couple of stories they did to get you started:

â€¢ Getting Ready for Carrboro High

â€¢ Footloose Bruce — Beyond the lawn 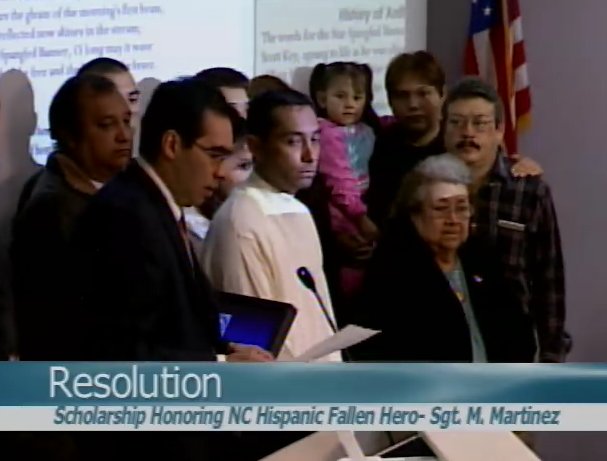 The town and the Latino community are responding to the death of Army Staff Sgt. Misael Martinez, an Orange High graduate, who was killed Nov. 11 during his third tour in Iraq.
This week, he was honored by the town. The opening of Tuesday’s Board of Aldermen meeting begins with a tribute to the young man.

NPR had a good piece in early December on the family and how their dealing with the fact that they have another son leaving for Iraq in January. After Martinez was killed, his father spoke out against the fact that his son was on his third rotation. His words at the ceremony on Tuesday–about 15 minutes into the meeting video–were particularly moving.
Also, this week, the Latino Community Credit Union started a scholarship in his name. There’s been a thoughtful discussion of the story and issues surrounding the war on Orange Politics as well as stories about Misael Martinez and the scholarship in his name in the DTH, N&O and Herald.

Paul Friedrich, creator of Onion Head Monster (and Hubie the Dead Cow), is opening a show at Wootini on Friday, De. 8 at 7 p.m. Evidently, Paul has added OHM pillowcases to the OHM line.

Paul Friedrich is a native of Raleigh and the great-grandson of the Grand Duke of Mecklenburg-Schwerin (ruler of Mecklenburg-Schwerin from 1837 to 1842). Drawing upon his vast and grand family history, Paul tries to represent traditional values and morals in his paintings as well as feelings of comfort. Paul’s color sense comes from a deep spirituality that connects him to the earth in ways that allow him to observe and realize our natural connection to blues, greens and ecru.

Update: I’ve posted the summary of actions for this meeting below the agenda.

C1) Approval of Minutes from 11/14, 11/21, and 11/28 Meetings
Approved
C2) Award of Construction Contract for Rand Road Extension Project (bike / ped. / emergency vehicle traffic only)
Approved
C3) A Request to Approve a Budget Amendment
Approved
C4) A Request for a Minor Modification to the Conditional Use Permit for the Winmore Village Mixed Use Project at 1400 Homestead Road
Approved
D1) Status Report on Sidewalk Bond Program
Accepted
D2) Reallocation of Funds from Seawell School Road to Estes Drive
Approved
D3) A Report on Benthic Macroinvertebrate Surveys in Bolin Creek
Accepted
D4) Continued Discussion of the Planning Boardâ€™s Recommendation Regarding Setback Provision of the DNP Overlay District
Public Hearing Set
D5) Discussion of Planning Board Recommendation for a Development Moratorium in the Northern Study Area
Tabled
D6) Consideration of a Charter Amendment Changing the Process for Filling Board Vacancies
Approved
D7) A Discussion of Legislative Issues
Tabled
D8) Consideration of a Proposal to Engage the Services of Michael Shuman to Attend the 2007 Planning Retreat
Approved

Download and Listen to Board Meeting (22.1 MB; in MP3 format)

Here’s the summary of Board of Aldermen actions taken at their last meeting:

C7) A Resolution Approving Amendments to OWASAâ€™s Sewer Use Ordinance

D4) Request to Set a Public Hearing on a Land Use Ordinance Text Amendment to Revise Provisions Related to Child Day Care Homes and Facilities. PH set for 1/23/07
Here’s the agenda: 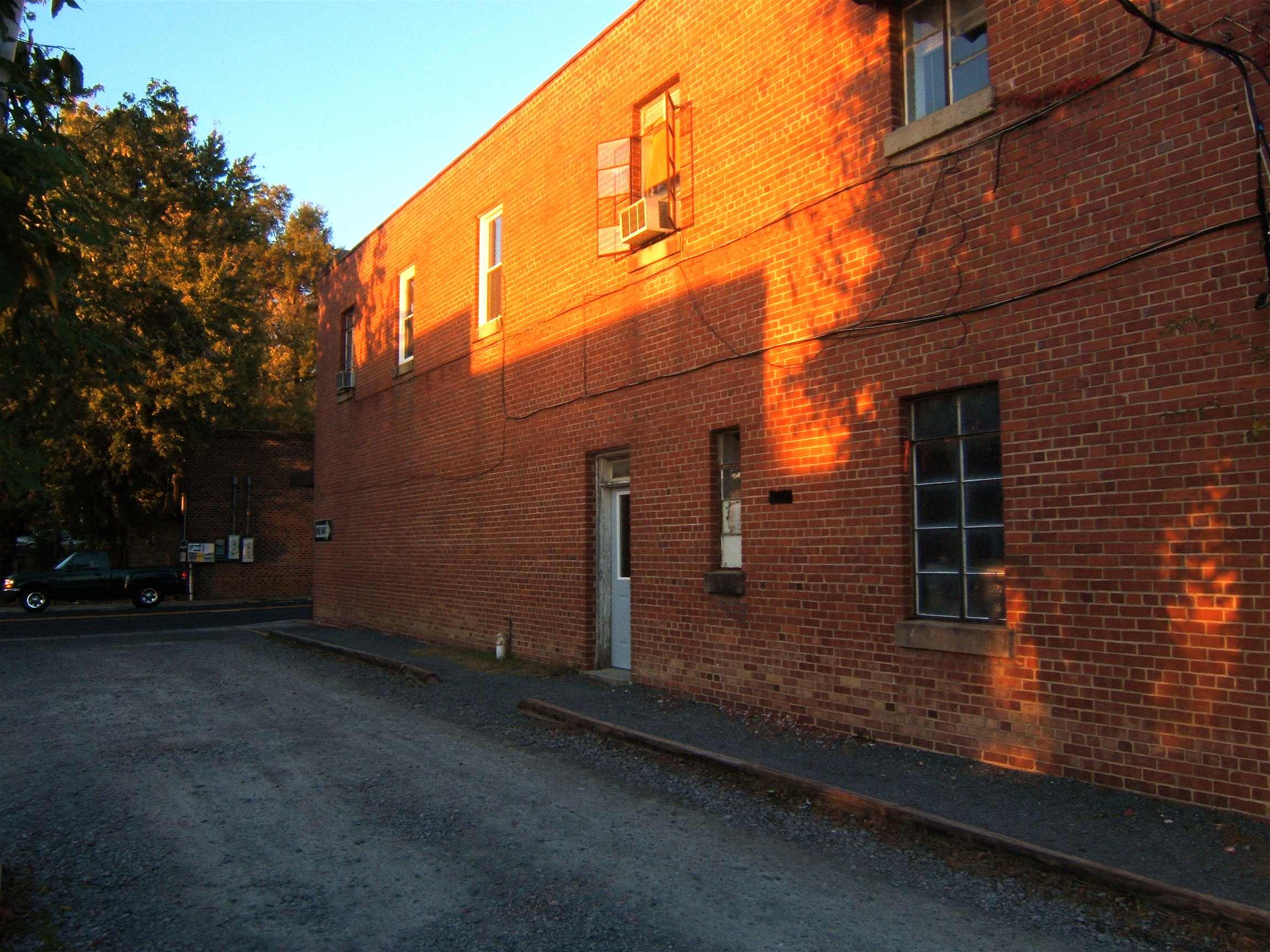 Sunsets over Carrboro
Just another photo from the Carrboro file.