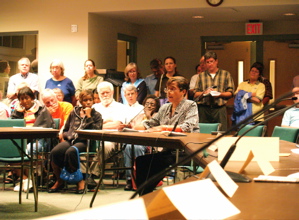 Just got the statement from Neloa Jones on behalf of the Roger Road Coalition. As follows:

Background
For nearly one hundred and fifty years, African-American families have lived in what is now known as the Rogers-Eubanks Community. In the late 1800s, Rogers Road was a wagon-track through black-owned family farmland and sawmills that stretched from Homestead to Eubanks and Millhouse Roads. There was once a school on Eubanks Road, Morris Grove, founded by a former slave, for black children not allowed to attend school elsewhere. As decades passed, this land was passed down to children, to grandchildren, to great-grandchildren, and in some cases, to great-great grandchildren. Some land was lost to debt, some simply sold. However, African Americans continued migrating to this community; they purchased land and established homes. Today, this community is a predominantly low-income neighborhood, but it remains socially cohesive and culturally rich in spite of the solid waste facilities that have worked to destroy it.
In 1972, when the Town of Chapel Hill decided to use 120 acres of land on Eubanks Road for the first landfillâ€”this was a thriving community, and it was strongly opposed to having a landfill near them. However, Mayor Howard Lee convinced this community to accept the landfill for ten years, promising that afterwards no other landfills would be opened near them and a park and other basic amenities would be provided when the landfill closed.

That was 35 years ago.
And inspite of the fact that Orange County prides itself on being aggressively opposed to social and environmental injustice, it has refused to honor decades of broken promises made to the Rogers-Eubanks Community. Local governments continue to expand solid waste facilities in this area: since 1972, two municipal solid waste landfills have been opened; two industrial waste landfills have been opened. We have yard and hazardous waste collection sites, recycling and garbage drop-off centers, a Materials Recovery landfill (MRF), and letâ€™s not forget about that toxic, smelly leachate pond (1/3 of an acre) right next to Mrs. Gertrude Nunnâ€™s property. The newest proposed addition to these ever-expanding solid waste facilities is the transfer station. And even though some people believe that closing the landfill and building a transfer station will improve conditions in the community, WE contend that it will not. Along with the transfer station, garbage collection trucks, and 18-wheelers we will still have the vermin, the stench, more air pollutants, and more noise. We will also have increased traffic that poses increased danger to our children and other citizens.

So our question tonight is this: why are low-income communities and communities where people of color live always the most vulnerable to solid waste facilities?
The National Environmental Justice Advisory Council has concluded that â€œWTS are sited disproportionately in areas adjacent to poor communities and communities of color.â€ The New York Times recently reported that â€œlow-income communities . . . shelter most of Americaâ€™s polluting facilitiesâ€; African Americans are â€œ79 percent more likely than whites to live in areas where air-pollution levels pose health risks.â€ Professor Robert Bullard of Clark Atlanta University contends that â€œthe people who live closestâ€ to waste facilities are those â€œwho have the fewest resources,â€ but that â€œdoesnâ€™t mean [they] should be dumped on.â€
On March 3, 2006, the Solid Waste Advisory Board (SWAB) passed a resolution recommending that the transfer station be located on Eubanks Road. Why? Because Eubanks Road is convenient, because the County can put the transfer station here cheaply, because the County will be saved the hassle of having to search for another site, AND because there was a GOOD chance that THIS community that has been dumped on for 35 years would not object TOO LOUDLY. On March 27, 2007, the Orange County Board of Commissioners voted unanimously to accept this recommendation from SWAB to locate the transfer station on Eubanks Road.

What we are asking for tonight?
This community wants Orange County to stop dumping garbage and toxic waste in their backyard.
The Rogers-Eubanks â€œCoalition to End Environmental Racismâ€ (CEER) supports this community in its demands for environmental justice. And these are our demands: 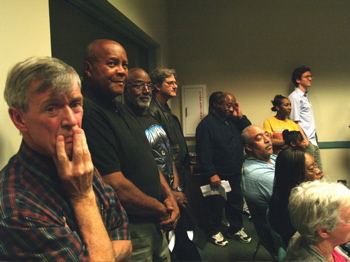 Thanks Kirk for posting the petition for redress.

And here’s a few photos from the event:
http://picasaweb.google.com/CitizenWill.0/RogersRoadCommunityAtAssemblyOfGovernments

Please include phone numbers in articles which list no websites.

Thanks.
PS Can you please supply their contact phone number?